Dear Arnold,
Once again I must remind you that I’ve moved to Washington. I’m not paying to have Silver Surfer registered another year in the Peoples Republic of California. I’ve signed two documents already stating as such. I thought this issue was closed back in October. 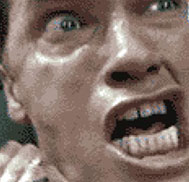 Unfortunately I received yet another nasty letter from one of your henchmen at the DMV. Even though you clearly know I live in Bellevue, Washington, I’ll sign this one as well. I’ll foot the bill for yet another stamp. But it ends here. All future letters from the California DMV will be sent to the trash.

Sorry Arnold. I know you need the money now in California. Having me leave the state was probably a huge hit to the economy. …Well at least to shrimp burrito sales.

Next To Be a Badass Kung Fu Master