George Friedman writes the occasional article for John Mauldin’s outstanding financial newsletter on topics of geopolitics. He is an engaging and thoughtful writer, so I knew I had to read his new book. 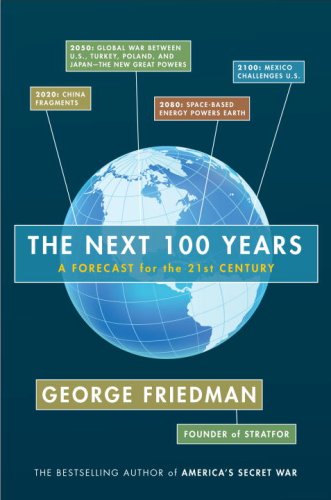 The Next 100 Years: A Forecast for the 21st Century by George Friedman is my first book dealing with long term political forecasting. I really enjoyed it.

Friedman mixed history, culture, geography, technology patterns, and demographic changes into all his forecasts. I expect the forecasting to be more accurate in the early part of the 21st century and to become less accurate in the latter part, as the later forecasts are often dependent on the earlier forecasts.

What countries will be moving up in economic and military power in the 21st century?

I’m not going to give away the entire book, but I will say he makes a strong case for why China will not be the dominant power that everyone expects them to be. I recommend this book. There is a science “fiction” section in the middle that involved a lunar attack that although unbelievable was very entertaining.

Next The Espresso Hike #1 – Queen Anne

Previous Guess Who Signed Up For The 2009 Rock ‘n’ Roll Marathon?