From the story Big bummer! More 0f us exercise, but still fat:

More Americans are exercising but rates of obesity and smoking have not changed, according to the latest government data.

A survey by the U.S. Centers for Disease Control and Prevention released on Wednesday finds obesity rates were frozen last year at around 28 percent of adults compared to 2008.

Makes perfect sense to me. Exercise does almost nothing to lean you out. It is almost all DIET. Too many carbohydrates and too few nutrient dense foods. You must fix the diet if you are going to lean out. Although it is possible to use exercise in a way that triggers fat loss hormones, the government’s own advice fails that metric. From the article:

Health experts and the U.S. government both recommend getting daily exercise about an hour a day of moderate exercise for most adults to keep weight off and prevent heart disease, diabetes and cancer.

An hour? Moderate? The key to activating fat mobilizing hormones, is brief high intensity exercise. Lift heavy weights, sprint, etc. The body thrives and responds favorably to exercise when it is brief and intense. Allow the body to succeed and then rest. Chronic prolonged predictable moderate exercise does not have the same positive fat mobilizing effects of brief intense exercise. You are not a hamster in captivity, stop training like one. 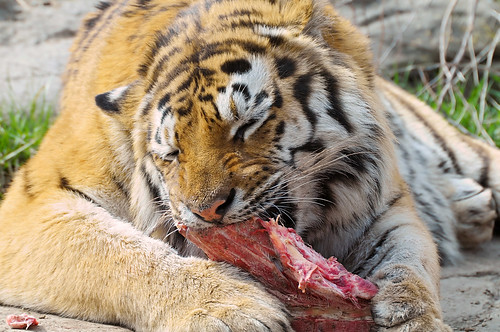 Photo Tiger eating his meat by Tambako the Jaguar. If you wish to be lean, follow the example of the tiger and not government experts: 1- Eat plenty of protein and fat. 2- Do some occasional strength work and sprints. 3- Sleep more. If you wish to be weak and obese, eat lots of low-fat carbs, drink “energy” drinks and read People magazine while moderately exercising on a treadmill.

An hour of moderate exercise daily will do next to nothing to lean you out. Eventually the body will compensate to the increased energy demands by increasing hunger and slowing your metabolism. The government would be far wiser if they advised Americans to spend that hour a day cooking their own meals or sleeping more.