Could Inflation in America Get Argentina Bad?

I haven’t posted much on finance lately as my interest in fitness and nutrition has held my attention. However, I have been thinking about inflation and if it could spread through the United States like it has started to in other countries. Argentina is expected to have 30% inflation in 2011. It has gotten so bad there that people are buying cars and parking them as a store of wealth.

With Ben Bernanke printing money via QE2, we are seeing food and oil prices rising. This is expected as printing money devalues our currency and we are forced to pay more for imports such as oil. In a food documentary I watched recently (forgot the name), it was estimated that 50% of the costs associated with conventional (non-organic) agriculture is fuel costs. So when Ben prints money, both your food and fuel bill go up.

I personally think Bernanke is an arrogant fool, but that is irrelevant. Will America see high inflation like the 1970s or Argentina? In order to answer this question I looked for similarities between modern Argentina and 1970s America. One thing stood out. In both cases there was a feedback loop between wages and rising prices via union representation. 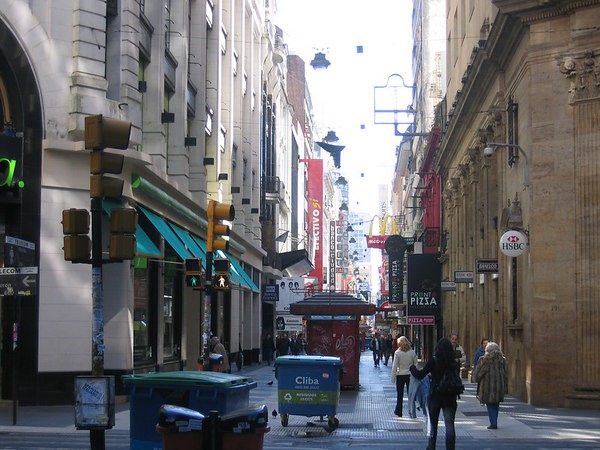 Photo taken during my 2006 trip to Buenos Aires, Argentina.

In 1973 unions represented 24.0% of all American workers. Today that number is just 11.9%. As prices increased, unions were able to get cost of living increases. This fueled more inflation. According to Encyclopedia of the Nations, Argentina has a history of high union representation with a 35% participation rate in 2000.

In both 1970s America and modern Argentina there was high union representation and a method for increasing wages to respond to rising prices. Today that mechanism is gone in America. Does this mean prices can’t rise? No, but it means that if wages are stable or declining that the rise in some prices will be offset by price declines elsewhere. Maybe not at the same time, but eventually. When your grocery bill goes up and your paycheck and credit limit remains the same, you cut spending on something else, because you can’t spend or charge what you don’t have.

The fact that prices are rising in the thing we need versus the things we don’t need may seem awful, but Americans spend a lot more money on the things we don’t need than necessities. We become debt slaves to houses that are too big, attend colleges that cost too much, eat out in restaurants rather than learning how to cook and buy gas guzzling cars instead of getting a bus pass.

I could be wrong. Maybe the modern mechanism for inflation won’t be wages. Maybe it will be something else. I’ll explore that possibility in a future post.

Next Paleo vs Weston Price