Monday I was heading south to Seward Park. Instead of using my GPS, I decided to just wing it and move my car south and east through the unfamiliar neighborhoods. My thinking was fuzzy. I really should have had another espresso before leaving the house. Then I ran into some dead ends and was forced to return west. I turned left and there was a Caffe Vita location.

It was a sign. I had to pull over and recharge. Seattle is loaded with quality coffee shops, however most are concentrated north of this area. This area was outside my espresso radar. The coffee gods were looking out for me. 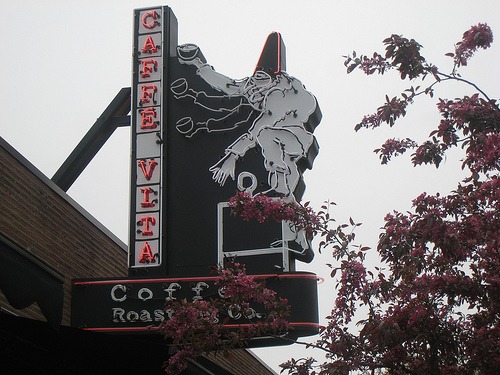 Barista: You are getting an extra shot.

Barista (beaming with confidence): You’re going to like it.

I love it when a chef, waiter or barista knows what they have is better than what the customer expects and you can sense the confidence. Imagine looking into Michael Jordan’s face as he is handed a basketball and an open court.That Look. My barista had That Look.

My drink which could best be described as a triple ristretto was amazing. Some people in the industry criticize the Caffe Del Sol Espresso blend, because Caffe Vita pre-blends the beans before roasting. Their loss. It was the best espresso I’ve had this week.

Next No Cardio Clarifications

Previous Poached Eggs – Snatching Defeat From the Jaws of Victory