I do not watch sports and the only gambling I do is on Wall Street. However, I am going to share with you a technique you can use to increase the odds that you will win a college football bet.

For the past 15 years I have been following the computer models designed by Jeff Sagarin. I do it because I like numbers and have a minor interest in how Ohio State does. His work is published on the USA Today website. Jeff is an MIT graduate that was an early pioneer in computer modeling of sports. My observation is that after about week 3 in a season, his models tend to be more accurate than the Vegas line. Well at least they have been for the games that I have followed, which is primarily Ohio State.

A month ago when Ohio State was ranked #1 in the country, Sagarin’s model disagreed. He didn’t even have them in the Top 10. When I added up the numbers, I knew it was very likely that #19 ranked Wisconsin would win. And they did.

Here is how you use the Sagarin model to determine how you should bet on college football. Note that Vegas sets the odds in a way that half the betters will lose every time. I would only use the model below when Sagarin disagrees with the Vegas line. By how much? That depends upon your risk tolerance. I personally don’t bet, so this is all academic for me.

For this example, I will use this Saturday’s Ohio State vs Iowa game.

Yahoo! Sports Odds shows that #8 Ohio State is favored by 3 points against #21 Iowa. 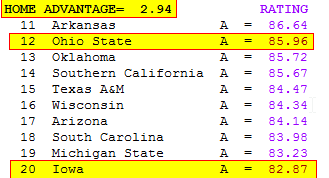 Now add it up to see the what the computer ratings model believes the line should be.

The game is at Iowa, so we subtract 2.94, which gives Ohio State a 0.15 point advantage over Iowa.

Sagarin believes the game is even and that Ohio State should not have a 3 point advantage.

Is this method right every time? Absolutely not. This is gambling. The best time to use the Sagarin vs Vegas method is when the difference is significant. I wish I had saved the data from just prior to the Ohio State vs Wisconsin game. It was a slam dunk to bet on Wisconsin.

Sagarin also does modeling for other sports. I have not followed those numbers.

UPDATE: Ohio State won by exactly 3 points. Vegas got this game right, but using Sagarin’s ratings any OSU bettor would have paused to make that bet.

Next Four New Books That I Can’t Wait To Read

Previous A Guide to the Good Life