The Rational Optimist – How Prosperity Evolves

These days I am bombarded with messages of pessimism in the news and financial blogosphere. Some of it is rational and some irrational. On the other side, there are charlatans and politicians that are ignoring reality and preaching messages of irrational optimism. I read this book because I wanted to hear a rational optimistic viewpoint from someone not trying to earn my vote or investment. 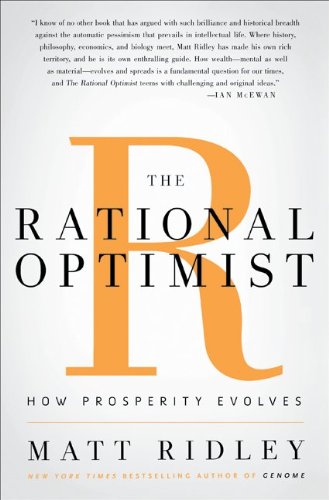 The Rational Optimist: How Prosperity Evolves by Matt Ridley appealed to me because it was it written by a science journalist. Early in the book the author makes a very important distinction between financial markets and the markets of goods and services. Financial markets will go through boom and bust cycles. They will encourage speculation, fraud and irrational optimism. However, the market for goods and services is where we should be focusing our optimism.

The book gives an exhaustive history of how human cooperation has made our lives better. By moving away from self-reliance and towards interdependence we all became better off. The history of trade and cooperation and how it improved living standards is really quite fascinating and The Rational Optimist covers it in great detail.

In the section on how our planet can feed 9 billion people, he makes a case against using organic farming, as yields would drop to the point we would be forced to deforest most of the planet. He also defends GMO crops. It is a topic I know little about, but I’ve listened to arguments against GMOs that I don’t think were adequately addressed. Ridley gives exactly one page to addressing the nutritional concerns. It was this page that I lost some faith in our author, when he stated this:

By the time this book is published soybeans with omega-3 fatty acids developed in South Dakota should be on the way to supermarkets in America. They promote to lower the risk of heart attacks and perhaps help the mental health of those who cook with their oil …

Pure Nutritionism nonsense. To think we know all there is to know about food and that we can use this knowledge to tweak Mother Nature has a long record of failure. I suspect that what we know about food is less than what we don’t know.

What I do know is that soybeans unless fermented for over 6 months have high levels of phytic acids which block mineral absorption. Got osteoporosis? Soybeans also contain phytoestrogens and goitrogens which disrupt sex and thyroid hormones. Soybean oil is highly inflammatory oil that is not heart healthy. Ridley also believes feeding cattle soybeans instead of grains is a good solution. So Ridley has optimistically figured out how to feed the planet. The end result is we will all have little sex drive, weak bones, thyroid problems and inflamed arteries. And that is just what we already know.

There is a big difference between cheap calories and cheap nutrition. Feeding people as cheap as possible usually comes with a cost that is paid later down the road. Filling bellies full of wheat, corn and soy is not a sustainable way to keep the human population healthy.

I hate to pick on the nutrition part so much, but it is what I know. The parts of the book that focused on goods, services and trade were very well written. He even made some interesting optimistic arguments about global warming and the future of Africa. The Rational Optimist detailed how pessimist predictions are historically inaccurate and the trend is always towards sharing and more wealth. Despite the soybean stuff, it was a pretty good book.

The Rational Optimist succeeded in helping me make the distinction on where to place my optimism. From a long term perspective our lives are getting richer in terms of goods and services. We tend to focus on solving the problems of tomorrow with the technologies of today.

Next The Cigar Defense For Bread