My Car Battery and the Science of Good Luck

Last winter when I was spending a bunch of money on auto repairs, the mechanic advised me to also replace my battery. He gave me an estimate of $200 for a new battery installed. That sounded high, but when you own a diesel you expect everything to be a little higher. I decided to hold off on getting a battery. For the next few weeks, I stopped off at different auto places to get quotes on a new battery. Every place I went didn’t have a battery in stock for my car.

My battery was only failing when the temperatures were very low, so I decided not to replace the battery right away. Throughout the spring, summer, and early fall my battery ran like a champ. Then recently as the temperatures started dropping, I noticed it was struggling to start. So once again, I started the process of looking for a new battery at a good price.

Before I go through the chain of events of what happened next, let me tell you about the book I was reading during this time period. 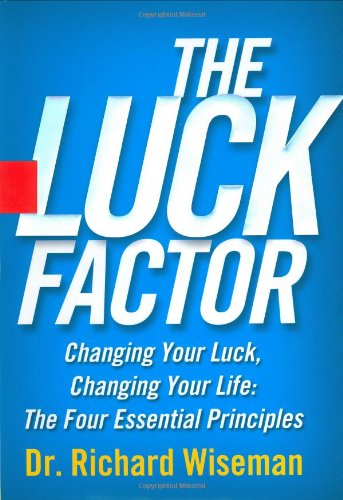 The Luck Factor by Richard Wiseman

The Luck Factor is about the science of luck. The author has done numerous experiments on people who consider themselves lucky and those that consider themselves unlucky. A lot of luck is how we interpret and respond to a situation. “Lucky” and “unlucky” people will respond to similar situations differently, which affects the actions they take or don’t take, which affects the outcome. This was the section I was reading that Saturday morning:

With that in mind, let me resume the car battery story.

My car battery would likely not last another month, so I went to a Walmart hoping to get a good price on a car battery. Plus they had free installation. A grizzled old Walmart mechanic looked under my hood for a good 30 seconds before asking me “Where is the battery?” and “Did you drive here with a battery?” I’m not kidding. Not a good sign. BAD LUCK. Then his sidekick appeared and let me know they didn’t have a battery for my diesel. Now normally that would be BAD LUCK, but given that their mechanic couldn’t even locate where my car battery was, I left with a sigh of relief. GOOD LUCK.

Then we had another week of warmer temperatures, so I waited until last Friday to resume my battery quest. I had thwarted the Car Battery Gods for too long. It was time to get a new one. When I went to start my car, it was dead. I had waited one day too long. BAD LUCK. Now I needed a jump. The day before I met one of my neighbors at Trader Joe’s. We had been neighbors for two years, but we never formally introduced ourselves until that day. Saturday morning I was able to get my newly met neighbor to provide me with a jump. GOOD LUCK.

Unfortunately, my car battery was completely dead. It wouldn’t even take a jump. BAD LUCK. Now I would have to pay for a tow. I’d also have to cancel my Espresso Road Trip event to Tacoma scheduled for Sunday. When I canceled, I got an email from a member volunteering to come over and help me get a new battery and assist with the install. GOOD LUCK.

We got an inexpensive battery at Sams Club that actually fits my car. He was a member. Unlike Costco which is a zoo on weekends, very few people shop at Sams Club in Seattle. There were no lines. GOOD LUCK. He also bought some tools to help with the install. When we got back to my car, I popped my hood and ran into the house to get some scissors to open the tool package.

When I returned to my car, my friend was chatting with a guy who we thought was changing a flat tire nearby. The guy looked at our tools and said that we had purchased the wrong ones and that we needed metric tools. BAD LUCK. Then I looked into his car, which had tons of tools. I learned he wasn’t fixing a flat tire, he was a mobile mechanic. He had every tool under the sun in his car. I hired him on the spot to install my car battery. GOOD LUCK. He wanted $50. BAD LUCK. I countered with $20. He accepted. GOOD LUCK.

I thought installing a car battery was a simple task. Not for my car. I watched as this guy changed my battery. His hands moved like a surgeon. My friend and I later chatted that we only thought we could change the battery, but after watching him work, we knew finding him was a Godsend. And we only found him, because he parked directly in front of where my car had died the day before. AMAZING LUCK.

In the end, I spend $98 on the battery and $20 on the install. A sweet bargain. At every turn where there appeared to be BAD LUCK. I thought about the lessons from the Luck Factor.

Lucky people see the positive side of their bad luck.

When Walmart didn’t have my battery it was bad luck, until I met the incompetent mechanic that was going to install it. Then it was a blessing.

Lucky people do not dwell on their ill fortune.

Despite numerous setbacks, I kept my eyes focused on solving the problem without focusing on everything that had gone wrong. The result was my car was up and running by Saturday afternoon and I was able to attend my Espresso Road Trip event the next day. There are some excellent lessons in The Luck Factor, which I will cover in a future post.