I Love My Chromebook

A topic I never blog about is technology. I tend to avoid the latest and greatest gadgets. Let others beta test the first few versions. If the technology is stable and is still interesting beyond the hype phase, then and only then will I give it a look. For the most part I try to do more with less. This strategy has worked well for me.

Last winter a netbook I purchased back in 2009 was giving me fits. I tried several free operating systems and I could not get the sluggish device to connect to WIFI. After giving up, I looked into all the non desktop alternatives. Tablets, Kindles, Laptops and the Chromebooks.

After weeks of research, I decided to get the Acer C720 Chromebook. I got the low end model which has 16 GB hard disk space and just 2 GB of memory. It only costs $200. How well has it worked so far? 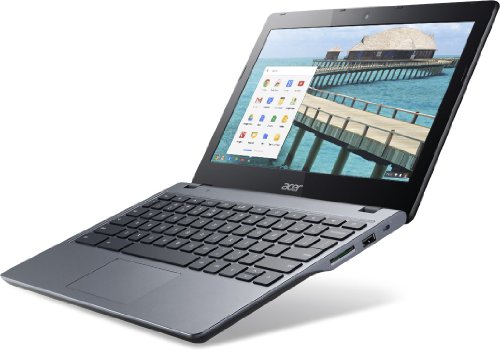 The Chromebook is wonderful. It is rocking fast, super light and has a long battery life. My one concern was if 2 GB of memory would be enough. It has been. I’ve had 15 tabs open on Chrome while streaming video without a pause. I talked with a tech worker that attended a demo hosted by a Chromebook rep. He was more than convinced that 2 GB was all you needed with the Chrome operating system.

For those unaware, the Chromebook is an operating system designed to work online that integrates well with Google applications such as GMail and Google Drive. Anything browser based can be done with the Chromebook. And in 2014, that is quite a bit. I use my desktop computer for installed applications such as SQL Server and Visual Studio. Pretty much everything else I do can be done from a browser or browser extension. There is even a version of Visual Studio now that runs inside a browser.

The Chromebook also has a built in video camera for video calls. However, you can’t use Skype. You’ll need to use Google Hangouts, which is kind of like Skype only it works a lot better.

I can’t say enough nice things about the Chromebook. For $200 you can’t beat the value. Penny for penny, the Acer Chromebook C720 is the BEST piece of technology I’ve ever owned. One last tip, don’t get the Acer C710. It is the same price, but it only has a 4 hour battery life, the C720 is twice that at 8.5 hours.

Next Have I Been Napping Wrong?