I was born and raised in Central Ohio. There was never a doubt that I would attend The Ohio State University. I am a Buckeye by birth. One of the great things about Columbus, Ohio is that it doesn’t have a professional football, basketball or baseball. The love of Ohio State unites the city.

Seeing someone in Columbus wearing Ohio State clothes is as common as seeing someone wearing camouflage on a military base. It doesn’t really mean anything. It’s the city uniform. 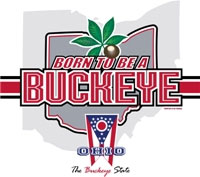 In 1994 I left Ohio. Since then I’ve lived and traveled all over this country. Every so often I’ll bump into someone wearing Ohio State gear. For a while I’d try and strike up a conservation, but I stopped once I realized something. My fellow Buckeyes who may be the nicest people when back home in Ohio, tend to be rude and unfriendly away from home.

Besides being unfriendly they tend to reinforce negative Midwest stereotypes. I don’t how many times I’ve seen overweight parents feeding Pepsi and corn-dogs to their overweight children all while wearing Buckeye clothes. The fact the father often has a mustache from 1982 only makes me more embarrassed.

About a year ago I decided to do my part to fix this image problem. When I leave the house wearing one of my Brutus Buckeye shirts, I make an extra effort to be friendly to everyone. If my mood is less than great then I won’t wear any OSU gear. If I’m in a really bad mood, I’ll wear my New York shirt.

I would like other Ohio State fans to see themselves as ambassadors once they leave home and decide to don the Buckeye uniform. And be honest with yourself. If you aren’t a nice person or a physical Adonis like myself, you may want to leave the OSU gear at home.

Next Stories By Ed, Jim, and Danny