Chris Matthews – Inside the Beltway Laws of Power

Recently I saw a video clip of Chris Matthews promoting his recent book. Even though I don’t watch his TV show Hardball, the book sounded interesting. 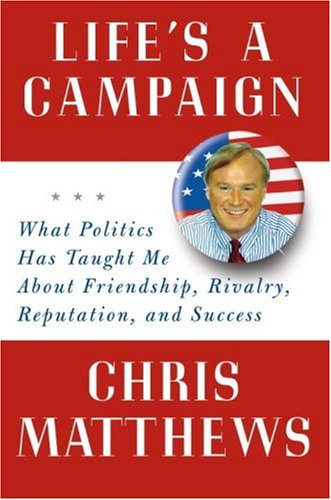 Life’s a Campaign: What Politics Has Taught Me About Friendship, Rivalry, Reputation, and Success by Chris Matthews is written in a similar style to the landmark book The 48 Laws of Power. Life’s a Campaign is an inside-the-beltway look at friendships, rivalry, reputation, and success. While I didn’t like the first 50 pages as Chris Matthews did a little too much navel-gazing, the rest of the book was a fun light-hearted study on the wisdom learned from politicians. He draws heavily from stories about Reagan, Carter, Kennedy, and his former boss Tip O’Neil.

The 48 Laws of Power by Robert Greene is amazing. In April, I discussed Robert Greene’s 3 books in more detail.