Why the modern world can’t seem to predict outlier events with extreme impact is the focus of the book The Black Swan. 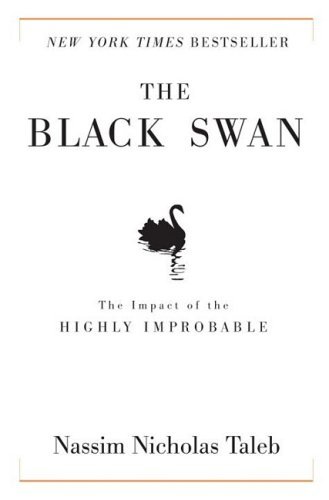 The Black Swan: The Impact of the Highly Improbable by Nassim Nicholas Taleb is not an easy read. It goes deep into mathematical history and philosophy. But the concepts buried in the academic name-dropping are fascinating and not hard to grasp. Black Swans are events that are rare, have an extreme impact, and have retrospective predictability. The latter term meaning humans later define the event in such a way to make it seem predictable. 9/11 was a Black Swan.

The collapse of LTCM, which I mentioned in my post When Genius Failed is often cited as the classic case of the Black Swan. It was a hedge fund that used mathematical modeling to create a low-risk strategy for massive profits. Then an event occurred that fell outside their models and the entire fund imploded. They lost almost $5 Billion in 4 months.

When your sample is large, no single instance will significantly change the aggregate or the total.

However, the author makes the case that information (which includes wealth) doesn’t follow the bell curve and instead has fat tails for which modeling can’t account for. In those cases:

…inequalities are such that one single observation can disproportionately impact the aggregate, or the total.

Way too much information for a single blog post. If you are interested in concepts such as predictions, narrative fallacy, confirmation bias and are willing to wade through unnecessary academic name-dropping, then I recommend this book.

Next Defending the Seattle Position