To Be a Badass Kung Fu Master

When I was in middle school back in Columbus, there was a Saturday night TV show called Black Belt Theater. Every week they would run some low-budget martial arts movie. A common plot theme is for the young student to train in a martial arts school under the supervision of wise monks. A friend of mine was obsessed with these movies and was convinced that one day he would become a kung fu master. But he never pursued it. 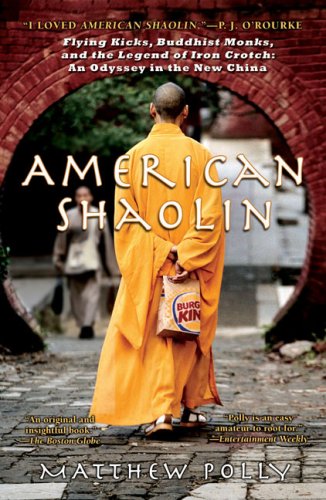 American Shaolin: Flying Kicks, Buddhist Monks, and The Legend of Iron Crotch: An Odyssey in theNew China by Matthew Polly is the tale of an American who decides not only to take martial arts lessons but to travel to China and study kung fu with monks in a martial arts school. Just like in the movies.

I loved this book. Not only are the martial arts tales often humorous (The Legend of Iron Crotch), but it provides a great background into the culture of China. If I ever go to China, I will probably read this book again. Highly recommended.

Next Civil Unrest Means it is Time to Order Coffee