Taco Bell and the Speed Zone

This story has been moved around my different web sites since 1997. The introduction was written in 2000.

Do you have a story that you tell that is so unreal that as the years go by, even you start to doubt whether or not it ever took place? Whenever I think back to the Taco Bell Speed Zone, I get that feeling. It was such an unbelievable promotion that at times I question if it ever really happened. A few weeks ago I was down in Florida visiting the old gang and the topic of Taco Bell came up. At that point I issued out a Do you remember? question to the table. My inquiry was regarding a foolish stunt that Taco Bell pulled in the Tampa Bay market that we all profited from. My good pal Bill remembered the Taco Bell Speed Zone with a devilish grin. The stories were true.

Not only were they true, but if I could resurrect my old web site from 3 years ago, I could once again tell the stories that were written during that time period. Once I got home I started going deep into my hard drive looking for my old Tampa Bay web site. While living in Tampa Bay I created a web site called Tributes & Slams. The Taco Bell Speed Zone earned a Tribute. Unfortunately for the rest of the country, it seemed that the Speed Zone was restricted to only a few markets. For reasons you’ll soon understand, The Speed Zone is long gone, however the original story written in 1997 survives. Enjoy! 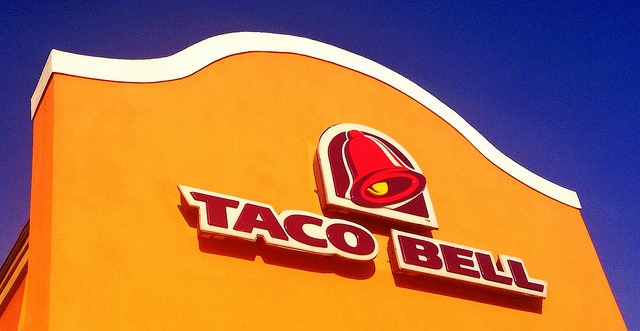 God love the stupid executives of Taco Bell. The latest stunt by the good people who brought us such great things as the 7-layer burrito, wild sauce, and the 4am drive thru, tops all. Taco Bell has come up with something they call the Speed Zone. For those unaware, here is how the promotion works:

Monday – Friday before 8pm Taco Bell must
deliver your order of 5 dollars or less in under 60 seconds.

The clock starts as soon as you pull up to the
window. If they fail to beat the clock, the
customer gets a $5 gift certificate to that location.

When I first read the rules I thought “This is insane, they can’t pull this off!”. For the record, I’ve never waited less than 3 minutes at my Taco Bell over by West Shore. Once I waited over 20 minutes. It isn’t bothersome, it’s something I’ve grown to expect. Taco Bell is penny for penny the best VALUE of any restaurant. But going to Taco Bell for speed would be as dumb as going to Burger King for nutrition. TB is just about value. For $1.48 I can get 2 bean burritos, ‘make believe hot sauce’ and a fresh cup of Tampa tap water. Yum!

Taco Bell has always been a little off in everything it does. It’s sort of cute how they rarely get an order right. When they make a 7-layer that resembles road kill more than food, it makes me laugh. Taco Bell is the Forrest Gump of business. Clueless with a big heart. Now they believe they are FAST. Time to prove them wrong and get some free food in the process.

Today, I tested the Speed Zone at the great West Shore Taco Bell. It almost seemed like an unfair fight. Here was I, an experienced Taco Bell customer ready to go toe-to-toe with some new hires. I didn’t need to read the menu, there would be no hesitation on my part. I knew my strategy from the start. High volume with a twist. I choose the low priced bean burrito as my weapon. My special request would be “sauce switch”. This is a technique where the red sauce is removed and a side of green sauce is prepared. This almost always causes a line to lock up. Also, by doing this I side stepped the chance they could have pulled out a bean burrito from the heat lamp. Now they had to make the order right then, there would be no 9am 200 degree burritos thrown in my bag. Going for the green sauce creates a mask of confusion amongst the workers. I knew the green sauce was kept away from the make table and often the person on register doesn’t know where it is stored. This is what I was counting on, I had done my homework. It was now time to execute the plan.

At 4:55 pm I struck. Hitting them in the middle of a shift change would surely catch them off guard. The drive thru was empty so I went for it. “4 bean burritos, no red sauce, with green sauce on the side”. I floored the car until I got to the window. The clock had started. As I handed the $3 over I noticed the inside of the store was empty. Not a good sign. More resources could be devoted to my order. The clock ticked past 40 seconds. Keep going, just a little longer! Maybe I should have ordered 6 burritos, I would have still be under $5. The clock was now at 55 seconds and there was no movement inside. Bring it on home! I had won. They forfeited the $5 prize. I had worked and planned long and hard. Now I was rewarded for that work.

Thank you Taco Bell for giving me a playground to match wits. I’ll probably be around tomorrow, the next day, and the day after. You’ll win a few, but I’ll win more. And in the end I’ll have enough burritos in my freezer to feed me for months.

This reader had a less fortunate experience at Taco Bell.

Hey..MAS man…..get this crap….Ann and I were in line at Taco Smell and they screwed us….of course you know the ol’ 60 sec food service…well we were in line….the person before us received a coupon…..then they held him up for a while…I was guessing they were getting ours ready so they would not have to give another coupon to us……Little did I know that they were waiting for the 8:00 bell….when we were up to bat…the clock stopped at 50 sec…..when I asked why it stopped….they said it was 8:00…per my watch, it was 7:58…..I was denied……Oh well….( ROGER S.)

Lovely steps up to the mike

Hey mas, My stomach hurt from laughing after reading your tribute/slams page. Taco Hell is what I call that lovely establishment. Did you know that in Tallahassee the Tennessee street Taco Hell gives free food to police, sheriffs and highway patrol officers? Scary. Just what Florida drivers need: a FHP officer hopped up on Pepsi, burritos (sans Beano), and those cinnamon curls watching the Florida State sorority chicks then getting out on the highway — lookin’ for adventure and Born to be Wild.

Mr. MAS I’m glad someone finally gave Taco Bell the praise they deserve. Their attempt to expand the customer base for cheap Mexican ( American corporate style) food stuffs market beyond the post dinner ( i.e. already drunk) crowd is commendable but nevertheless wrongheaded. After all a 99 cent bean burrito doesn’t seem like such a good deal in the full light of day. It is however, very appetizing immediately after last call ( hint: to beat the rush you must get to the Border before 1:45 am). If Taco Bell is looking to increase the bottom line I suggest they not open before 10pm and immediately apply for a license to become an after hours bottle club ( if they install showers and lockers you could go from bar to Taco Bell to work and never have to sober up). Taco Bell should abandon this latest attempt to lure hurried yuppies and concentrate on pleasing us drunkards that made the “run for the border” the exciting alcohol soaked part of Americana it has become. Taco Bells only real competition is White Castle and Krystals (those 99 cent square burgers are also great drunk food) but since they have yet to invade the Tampa Bay market Taco Bell has the market all to themselves. Bean Burritos for all!

Perhaps you need to post updates to your Taco Bell watch, as some Bells are worse than others. The one on Kennedy and WestShore, they’re clock stopped at 20 secs! I called the manager and got my $5 cert.!

Another trick that seems to work (I’m still testing it), is to open your car door while the clock is ticking (wait till it’s in the 40s or 50s!), it resets the clock!!! I, of course, complain bitterly to the manager, $5!!!

DISCLAIMER: MAS does not endorse cheating at the Speed Zone. Play fair and play often!

Next E-4 and Holding