Tales From the Glitter Gym – The Pick Up

For a good background on this post read Tales From the Glitter Gym – Early Influences.

Any reader of the Tales From the Glitter Gym series will know that I have my fair share of gym pet peeves. Let me add another to the list: the pick up. It seems to be a common wisdom that one meets members of the opposite sex at work, bars, church or the gym. No! No! No! The gym is not the place to go on the prowl.

Let me be more specific. The weight room is not the place to play Casanova. If you want to play Leisure Suit Larry over by the treadmills and other useless steady-state aerobic contraptions – be my guest. Just stop it in the weight room.

My first Glitter Gym experience was around 1997 in South Tampa. The gym was crowded and I’d see a bench being reserved by some slicky-boy while he was over chatting up some Barbie. Meanwhile someone was standing behind Barbie trying to grab a dumb-bell. You had four people not working out because Slick needs to flex his bicep in front of Barbie. Make it stop.

There is nothing pretty about lifting weights. If you look good while pushing weights – then the weight is too light. Here is what a weight-lifter looks like when the weights are challenging. 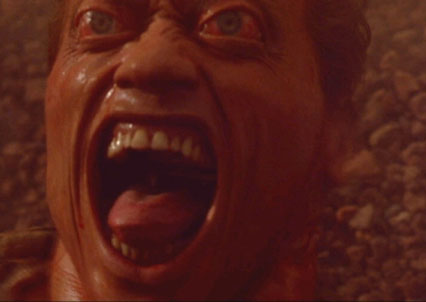 In my experiences women don’t hit on men in the gym. Maybe it happens, I’ve never seen it. Most guys don’t hit on women at the gym either. Recall that the reason most people go to the gym is to alter their body composition. They see themselves as heavy or too scrawny and go to the gym to make improvements. Self confidence usually doesn’t peak until after you leave the hall of mirrors in a Glitter Gym and return to the masses, most of which don’t exercise.

Rust Gyms don’t have the pickup problem. Here is what I wrote in Tales From the Glitter Gym – Early Influences:

The membership was 95% male and the 5% of the females would best be described as the anti-Barbie.

I’ve observed three classes of guys who hit on women at the gym.

There is one exception which I didn’t cover. That will be the topic for the next installment of Tales From the Glitter Gym.

UPDATE: Tales From the Glitter Gym – The Pickup Part 2

Next Returning to Basketball

Previous In Defense of Food