In the post Black Coffee and Espresso – Not Calorie Free, I discovered there are trace amounts of protein in brewed coffee, but not in espresso. According to CalorieKing:

The first part of the mystery is figuring out if brewed coffee really has protein. I do not have a science background, but I’ll try my best to figure this out. If I make an error along the way, please let me know in the comments.

The January 1995 issue of Plant Physiology has an article titled A cDNA encoding a metallothionein I-like protein from coffee leaves (Coffea arabica). In this study, the authors state they found an 80 amino acid protein in a coffee plant.

We now report the isolation of a full-length cDNA from immature coffee (Coffea arabica) leaves encoding a metallothionein I-like protein (Table I). The deduced coding region encodes an 80-amino acid protein with 64% identity to a Ricinus communis metallothionein.

This Coffea arabica protein is also found on the WikiProteins.org site, where it also goes by the name coffee metallothionein I.

Now to the next question in the coffee protein mystery: Where did the protein go in the espresso? Espresso is still derived from the coffee plant. I have two theories:

Brewed coffee has 0.3 grams of protein per 6 ounces. This works out to 0.05 grams of protein per ounce. If espresso extraction has no impact on the protein, then the 0.05 number should be rounded up to 0.1 grams. CalorieKing rounded a 1.2 number to 2.0 on calories, so they wouldn’t be shy about rounding a 0.05 to 0.1. So we are still missing some protein in the espresso.

What if the coffee brewing differences between brewed (saturation) and espresso (pressure) caused the protein to be denatured? TheFreeDictionary defines denatured as:

3a. To cause the tertiary structure of (a protein) to unfold, as with heat, alkali, or acid, so that some of its original properties, especially its biological activity, are diminished or eliminated.

The Wikipedia page on Denaturation also mentions temperature, but not pressure. Lets tackle temperature first. According the SCAA, the ideal brewed coffee temperature is 200 F (93 C). Although espresso temperatures can vary by blend, I’ll use the number EspressoQuest charted, which is 198 F (92 C). So our temperatures are basically the same. Is it the pressure?

A study titled On the physics of pressure denaturation of proteins from The Journal Of Physics: Condensed Matter authors Yuichi Harano and Masahiro Kinoshita write:

A protein, a long polypeptide chain, spontaneously folds into a unique native structure in aqueous solution under physiological conditions [1]. However, the native structure is unfolded by various perturbations such as the addition of chemical substances, the change in the temperature or pH, and the application of a high pressure [2 6].

I located other studies that link protein denaturation and pressure. So it appears the mystery is solved. A coffee plant has protein on the root. Even after the beans go through processing, roasting, grinding and brewing temperatures, there will be a trace amount of protein left. However, if exposed to the pressure used to extract espresso, that trace amount of protein becomes denatured.

Hope I got that right. If I made an error, please let me know in the comments. 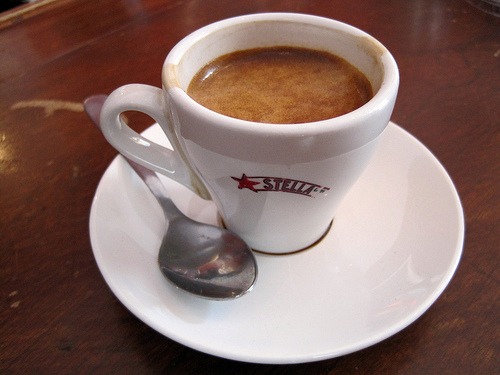 The Espresso Quest – Blog post by Instaurator (Site down January 2015)

On the physics of pressure denaturation of proteins – Journal Of Physics: Condensed Matter study by Yuichi Harano and Masahiro Kinoshita (Issue 7: 22 February 2006)

TigerAl – Forgot to mention that the resolution of the measuring (in this case, weighing) device also would play a part in the error. I dont think CalorieKing cares that much about decimal point precision in calorie reporting. Your research and case was impressive though, MAS

Paul – What a fantastic and fascinating blog. I love coffee and discovered this via the ineedcoffee website when looking at roasting my own coffee. It has been a few years since I studied biochemistry. I could be wrong and it wouldnt be the first time. Part of what makes a protein one kind and not another is the way it folds up and looks three dimensionally. Boiling and together with high pressures will denature a protein that is to say break the bonds between certain amino acids that cause it to have the particular 3-d shape. However, chemical tests for protein would still reveal its presence.

Protein is a big molecule and perhaps crucially for your problem does not dissolve in water. Protein forms a suspension when other chemicals are present e.g. salt that is sodium chloride when dissolved in water separates forming sodium+ and chloride- these separate entities form a charged solution that interact with small charges on H2O molecule and also could form a protein suspension because certain common amino acids have either positive or negative charges.

What I think occurs is because the protein is too large to be moved into the espresso cup by the time it takes to for it to form (there is high pressure but also resistance and impediance to movement by all the grind around it). perhaps if you boiled a liter of water through an espresso measure of coffee grind you may be able to sequester the protein.

But when you use a French press because the coffee to be drunk is mixed directly with the grind with heat and stirring will allow protein molecules to rise. Ultimately to fall but at least present in their minuscule quantities is the drink.

I never considered that option. The protein is still in the puck. I like your theory. Thanks for the comment!

Next Intermittent Fasting – Fears and Motivations

Previous You Either Shut Up Or Get Cut Up