I really didn’t pay attention in my high school biology class. Now I am making up for it. 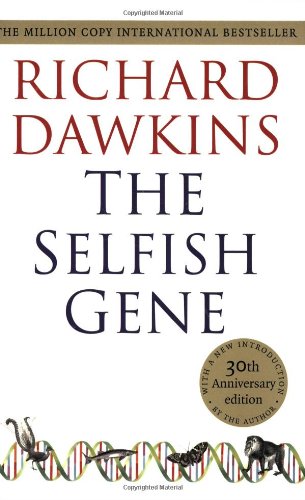 The Selfish Gene: 30th Anniversary Edition–with a new Introduction by the Author by Richard Dawkins was a great introduction into a topic that I never really thought much about before. The Selfish Gene is considered a classic work in genetics. The book was written in 1976, but some of the material has been updated in the 30 year anniversary edition.

The Selfish Gene was easily understandable and very well written. Despite my limited science background I had no problem learning the topics covered, which included Evolutionary Stable Strategy and Prisoner’s Dilemma. Granted that this is the only book I’ve read on this topic, so there may be better ones out there. The only downside was the last chapter was really a forced plug for another book. The writing was jumbled and harder to understand. Even the author added that the last chapter was a poor substitute for The Extended Phenotype.

Richard Dawkins is probably best known recently for being an outspoken atheist. This book did not explore religion and stuck to the genes.

Next Bellevue Steps Up To Quality Coffee at Vovito

Previous Going on a Distraction Diet