Why My Kimchi is Awesome

I’ve now been making kinchi for three years. During that time I have made it different almost every single time. Also during this period, I have shared my kimchi with many people. The feedback has been extremely positive.

One of the compliments I have received several times is that some people who state they normally don’t like kimchi, like mine. For years I’ve just considered this statement to be a polite gesture. I don’t consider my kimchi superior to others. I am a kimchi fan and have liked something about most kimchis I’ve tried. Even that sweet kimchi I had in Ohio that used paprika instead of Korean red pepper chili flakes was an enjoyable experience.

Lately, I’ve been asking for more detailed feedback about my kimchi. I’ve also gone back and looked at where my method deviated from traditional kimchi. And I think I found the answer. At first, I thought it was an ingredient in my kimchi or even the length of ferment, but it isn’t. When I first started making kimchi I used a saltwater brine to soak the cabbage. When it came time to pack the kimchi, most of the salt used didn’t make it into the jars. When I moved to the “rub the salt in by hand”, which is more common for sauerkraut, I never rinsed the cabbage.

You can do a search for kimchi recipes and you will see almost all have you rinse the salt off the cabbage before packing the jars. The logic is that the salt has done its job of pulling the water out of the cabbage and is no longer needed. But I think it is needed for taste and texture. I’ve also discovered that salt compliments the Korean red pepper flakes. Too little salt and the heat dissipates too fast. Also, I’m not using just any old salt. I’ve been using the great-tasting Redmond Sea Salt. Why would I want to rinse that down the drain?

The reason my kimchi is awesome is that I use a superior salt and I don’t rinse it off prior to packing the jars. My most recent kimchi recipe is Kimchi 2.0. Actually, if you want to try my latest idea, add some Chinese chives to Kimchi 2.0. It adds a nice touch of sweetness, which compliments the mustard leaf bitterness. 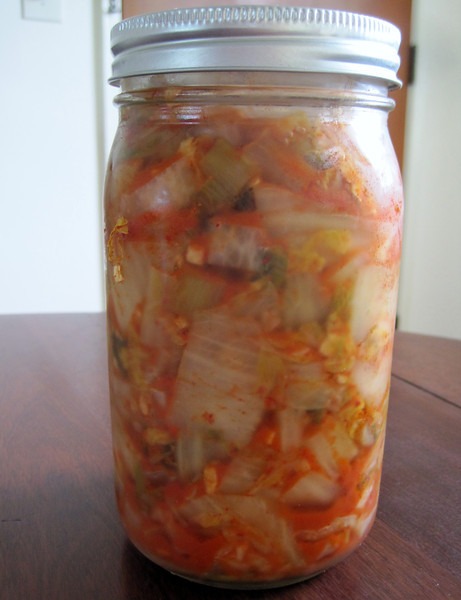 One of my many kimchi creations.