After posting both parts of Was I Wrong About Gluten?, I felt I still needed to tie everything together. Like other aspects of nutrition, when there is massive disagreement, I try to approach the debate as an investor. When disagreement levels are high among smart people, one should assume that both parties are working from incomplete information. Over time we will learn who is right and who is wrong and what we didn’t even consider. Just like investing.

So in this post I am not going to assume that gluten is either safe or harmful. I’m going to assume I don’t know. After reading so much about gluten from both sides of the argument, here is the path I would take to answer the question for myself.

If You Feel Awesome

If you feel awesome, skin looks good, joints are OK and you have good digestion, move along. Either gluten isn’t bothering you or you are resilient. Focus your efforts elsewhere. If something changes later in your life, you can always revisit this question.

Because 10-30% of the population either has or is suspected to have some gluten intolerance, I believe it is wise to remove 100% of gluten for 30-60 days. During this time, pay attention to how your gut health feels. Do your joints feel better? How about skin quality? Are you having fewer headaches? Weight loss?

Ending the test after 30 or 60 days will depend upon how the test is going. If you aren’t seeing any difference, end the test at 30 days. If however, you are noticing benefits, keep the test going. At the end of the test, reintroduce some gluten and then monitor your health closely for 4 days. Try not to stress about this. The default assumption should be that you are a resilient person. If you are fine, go about life knowing you did the test and you can handle gluten.

If Gluten Was an Issue – Repeat the Test with Dairy

Many health professionals that are anti-gluten also recommend eliminating dairy at the same time. You can go that route if it works for you. For me I would only do that test if I suspected I had a dairy issue and I came into the test feeling poorly. It is hard enough to eliminate gluten by itself.

Once I knew gluten was an issue for me and removed it from my diet, I proceeded to add a 30 day test with no dairy. I had no issues.

As I mentioned in Part 1, one of the theories behind the rise of gluten intolerance is the “old friends” hypothesis that we evolved with our gut flora, which helped us deal with grains. When we have poor gut flora from taking antibiotics, overuse of antibacterial soaps and lack of fermented foods, we are more likely to respond poorly to gluten.

I don’t think there is a downside to assuming that your gut flora can be improved. If you are ill, you can seek out a naturopath doctor. They will run test and come up with a way to restore your gut flora. If you are OK, consider adding fermented foods to your diet. I started making kimchi over 3 years ago and added dairy kefir on a regular basis last December. Besides it being a rewarding hobby, I rarely get sick anyone and I think it has helped me when I get exposed to small amounts of gluten. One could also take supplemental probiotics or prebiotics.

In July 2012, I saw a presentation from Ramiel Nagel about reversing tooth decay and curing cavities. One the points Ramiel made during the presentation was how it probably wise to avoid grains if one is susceptible to cavities. The reason he explained was that in traditional cultures grains were processed in a way that made them safer to consume. Grains went through a partial fermentation by laying the field post harvest. The grains were then soaked prior to use. 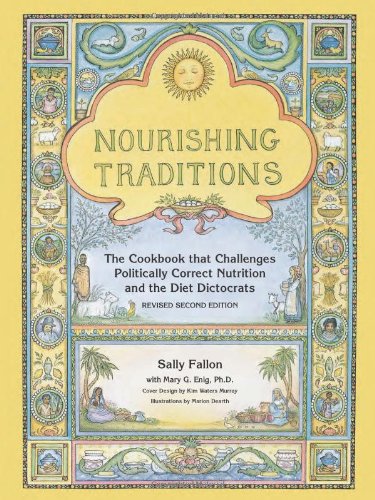 Nourishing Traditions: The Cookbook that Challenges Politically Correct Nutrition and the Diet Dictocrats by Sally Fallon

Our ancestors discovered that grains were safer and more nutritious when they went through soaking and partial fermentation. Sally Fallon’s article Be Kind to Your Grains…And Your Grains Will Be Kind To You covers how traditional preparation disables the anti-nutrients as well as how different cultures around the world came up with similar strategies for processing grains. Her recommendation is to soak your own grains, but if you can’t do that choose sourdough or sprouted bread.

One of the benefits I got from eliminating wheat from my diet was I greatly expanded my sources of carbohydrates. I now have a rice cooker and I’m always trying different rices that I find at the Asian grocery stores. Prior to going gluten free, I don’t know if I ever tried other grains such as sorghum or millet. I’m also now consuming a variety of root vegetables that I never did before going wheat free.

Even if one doesn’t have a gluten issue, I think seeking nutrient diversification is a wise idea as the nutrients one is deficient in aren’t likely to be found in daily staples. In other words, don’t blindly reach for a loaf of bread every week. Get some parsnips, basmati rice or a purple yam. Mix it up.

I mentioned that today I can now handle soy sauce, which has wheat in it, with no issues. I also mentioned that I was fine with 4 oz of beer. Sunday I learned the hard way that 10 oz of beer was too much, as I had an 18 hour headache. Despite the fact I’m not 100% healed of gluten issues, I’m still better than I was before and maybe I’ll continue to improve.

Some people won’t become more resilient. They will become increasingly sensitive. At least they know, which is a great thing.

Removing gluten is a tool one can use to improving their health. It won’t work for the majority, but because it is such a powerful tool, I think it is worth testing if you are having health issues that have been linked to gluten intolerance. Of all the health experiments I’ve tried – and I’ve tried a lot – nothing has come close to benefits I’ve received from removing gluten.

Next Finding My Relatives on 23andMe

Previous Was I Wrong About Gluten? Part 2