Learn a Foreign Language SUPER FAST or Not

I wanted to give an update on my progress learning Spanish followed by my thoughts on the advice being peddled in the blogosphere on language learning.

The last language update I found on this blog was on September 26, 2015. In the post King of the Road, I mentioned that my Duolingo streak was at 132 days and I was at 6% fluency. I had just finished Pimsleur Spanish 1 and was starting Pimsleur Spanish 2.

Today I have a Duolingo streak of 346 days and a fluency score of 24%. I should have a streak of 550 days, but that is a long boring story. Now I am halfway through Pimsleur Spanish 4. I listen to educational podcasts in Spanish and spend 30-45 minutes a day on a vocabulary app called Memrise. Two hours a week I have Skype lessons with a teacher in Venezuela. Yet I am not close to being fluent. And that is OK.

I have no specific goal other than to keep improving. If one day I am fluent, great. If I can only read a newspaper, that is fine as well.

Well, today I can read a good chunk of the news stories on BBC Mundo. Not quickly and I do need to look up words, but I’ve made a lot of progress. 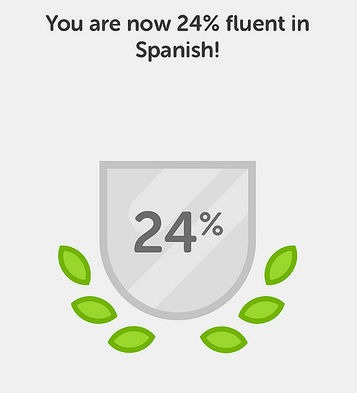 Now I want to share my thoughts on a lot of the language advice I see online.

#1 Every Tool Has Successes and Failures

There are many tools to learn a foreign language. Not every tool will work for every person. I think that people are too quick to state their way is right the way because it worked for them. But almost every tool works for at least some people or it wouldn’t be around anymore.

This summer I spent 8 weeks taking Accelerated Spanish 1 at a local Community College. It was mostly wasted money. I was already beyond the level of the class. Most of the students didn’t take it seriously and stopped attending. Even though I got little value from the class, I knew at least two of the students benefited a lot. For me, the apps and YouTube videos were better. They likely signed up for Accelerated Spanish 2, whereas I hired a teacher via Skype for one-on-one instruction. Community College is probably a better choice for them, whereas the Skype way is working better for me.

There is far too much debate on which language program is best. Pick something and get started. If you don’t like it, grab a different tool, and proceed. And if someone leaves a comment on which tool is best in the comments, then I’ll know this blog post failed.

#2 Enough With the Polyglots

Maybe I’m alone here, but I don’t find it encouraging to get advice from someone that speaks multiple languages and can learn additional languages super fast. I find it discouraging. Because even though my goal is to just make progress every day it does get frustrating to see some 25-year old that likely grew up in a bilingual household tackling his 5th or 10th language.

I’m reminded of the old muscle magazine ads where some steroid monster is selling a program on how to get HUGE. I might get huge or I may discover that our monster had an advantage that I didn’t have.

#3 The Keys to Learning a Language SUPER FAST

I’ve seen the videos and read the books on rapid language learning. There seems to be two keys for rapid learning. Key 1 is it really helps if you’ve already learned at least one language in addition to your birth language. Tackling your 3rd or greater language is going to be much easier than tackling your 2nd.

Yo soy la tortuga (I am the turtle)

I’ve added over 30 Friends on the various language apps in the past 18 months. Of those, only about 5 are consistently putting in the effort daily. Instead of being the hare, I decided to be the tortoise. I spend an average of 60-90 minutes a day on Spanish. When I started it was closer to 15 minutes.

Even though the polyglots can achieve fluency in 90 days or less, I haven’t. But my confidence grows a little each month that I will someday. The most important thing is I am having fun. I am enjoying the journey. Had I tried to be the hare with a target of becoming fluent in a few months I would have absolutely quit a long time ago.

If you are learning a foreign language and looking for a Skype teacher, I use italki. Here is my referral link.  We both get 100 ITC (credits= $10 USD) if you join after you take your first lesson. I use PayPal as I’ve had issues with their credit card processing.

Next The Potato Diet is a Calorie Savings Account