Recently, nutritional pioneer Ray Peat died at the age of 86. I have several posts on this blog that reference his work. I’m not a strict follower, but I have borrowed some of his ideas.

This post will not be about Ray’s contribution to our understanding of nutrition. It will be about preserving the digital legacy of someone that has passed away.

When I heard that Ray had passed away, my first thought was what was to become of his website. Ray did a great job with his site. He published his articles and he left them alone. Unlike so many in the nutritional space, he kept his site going, and he didn’t move links. I run a broken link checker on this site and I’ve never once had to fix a broken link to RayPeat.com.

I hope Ray has an assigned backup for his domain registration and if so, I hope they maintain his website. But I am doubtful. Many of his most popular followers have demonstrated the inability to keep their own websites up and running. See my 2017 post titled The Digital Graveyard of My Health and Fitness Mentors for examples.

Whois hides the registrar information for RayPeat.com, but it does say the domain is expiring on March 1, 2023. If it is not renewed, bots are far more likely to capture the domain faster than a fan the second it becomes available. If that happens, all of Ray’s writing will be taken down and replaced with spammy affiliate links. There are thousands of inbound links to RayPeat.com. That makes it worth the effort to capture the domain. 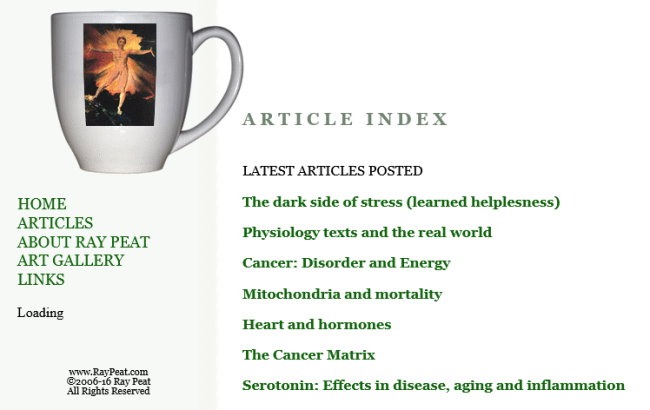 In 2010, a popular Miami-based radio personality died. Then a few months later, the man running his website died. From the post My Tribute to Radio’s Neil Rogers:

Just when I was about to reach out to Eric, I discovered he had recently died. Young man too. I believe he was in his 40s. Eric was a one-man operation. At this point, I realized it was just a matter of time before the NeilRogers.com site went dark. Servers need human intervention and they also need someone to pay the electric bill. Using a download program I was able to grab all the audio from the site, which were the bits he played. A few months later the site went dark. There was no backup name on the domain registration. No one knew anyone associated with Eric. To this day the data on that server or any backups remain lost.

The rest of the post describes the other steps I took to successfully preserve that digital legacy.

I hope I’m wrong and someone out there continues to renew the registrar and hosting. But if not, here is what I would do.

The good news is the effort to save Ray’s content is far less than the work I had to do to save thousands of hours of audio. All of RayPeat.com could be saved in a weekend, but the clock is ticking.

Some might argue that the Wayback Machine on Archive has snapshot copies of RayPeat.com, so all my outlined steps are unnecessary. That is true today, but not necessarily true in the future.

I briefly poked around the Ray Peat Forums and Reddit page. I didn’t see anyone mention preserving his website. I hope I missed the post and someone has already taken a leadership role. Please leave a comment if you are that person or if you need my assistance. I expect I will have to update some broken links to Ray’s site next year.

Next Body Weight Wisdom I Heard 20 Years Ago