After reading this book, I’m convinced that humans are programmed to not learn from history. 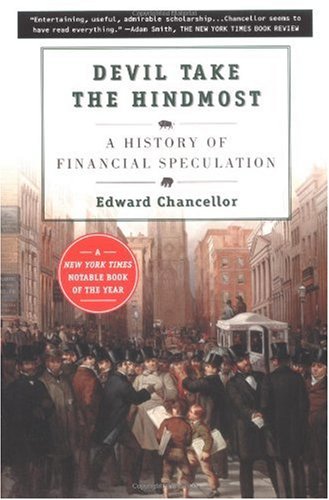 Devil Take the Hindmost: A History of Financial Speculation by Edward Chancellor covers financial speculation from Tulip Mania through the LTCM crisis of 1998. The book was published prior to the dot-com crash. Even though I found the early chapters a bit dry, the second half of the book provided an excellent overview to many of the financial disasters of the 20th century.

The most interesting chapter was Kamikaze Capitalism: The Japanese Bubble Economy of the 1980s. Listen to these characteristics of the Japanese economy at the end of the 1980s.

That list reads as if it were the United States from 2002-2007. After the bubble burst in Japan, they started a long period of deflation. I use the term deflation to mean a contraction of the money supply, not falling prices, which are a symptom.

What happened to Japan in 1990 looks like what is happening in America in 2008.

The Japanese spent over a decade attempting many failed policies to jump-start the economy. Unfortunately, this list looks familiar as well.

Almost a decade after the bubble burst in Japan, Standard and Poors estimated that Japanese banks still had bad loans of $1.1 Trillion USD. Perhaps Ben Bernanke would be wise to read this chapter. In a global economy where capital flows to seek the highest returns in a transparent marketplace, Japan’s 1990s is much more relevant than the United States’ 1930s.