This page was first assembled in 1999.

From March 1994 to August 1998, I lived in the Tampa Bay area. This is my collection of Ybor City overviews and memorabilia.

The CASTLE is a gothic/industrial club on the back side of Ybor. Leave your Gator sweatshirt at home and wear something black. If you like the music, you’ll love the Castle as much I do. If you don’t you’ll be highly uncomfortable. When the Oak Barrel Tavern closed, Richard came over and created Oak Barrel Wednesdays. Below is one of the coolest fliers ever made for an Ybor club. 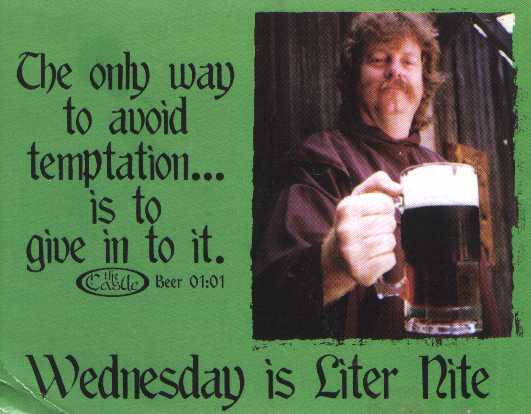 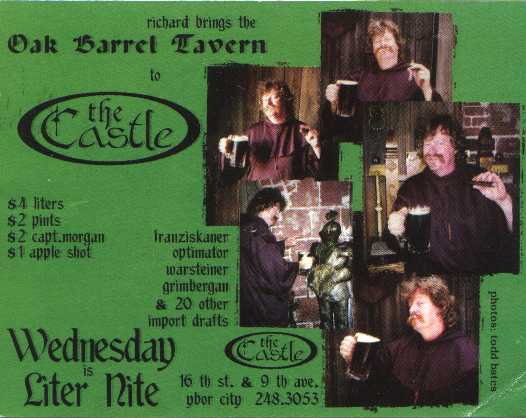 The EDGE was a spacious club that was sort of hidden. It resided behind Platforms by the railroad tracks. When it opened it was a refreshing change from the Empire. Great ventilation and music. Unlike the Empire, a non-smoker could actually breathe in this club. Another good thing about THE EDGE was they handed out free passes like candy. And unlike other clubs they kept the line moving a quick pace. The EDGE went under in 1998.

The EMPIRE came into existence after the Masquerade moved into the place formerly known as the Ritz Theatre. That vacant spot quickly became the Empire. In 1994, The Empire was a single floor. They wouldn’t expand to the 2nd floor until 1997. Early on Empire played alternative and even gothic music, but overtime they regressed to a more hip-hop atmosphere. 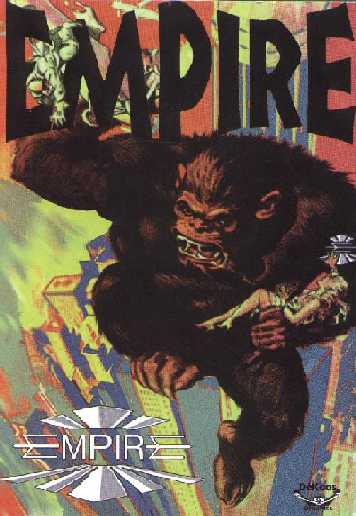 The FOAM PARTY is perhaps the greatest innovation in clubbing since the disco ball itself. Imagine being inside an enclosed dance floor as massive amounts of bubbles pour over you. The bubbles start piling up as the music plays. Before long the dance floor ranges from 2 feet of bubbles at the back to 6 feet of bubbles in the front. Fellow patrons are running around with squirt guns and Super Soakers. Couples bury themselves in the foam for privacy. In short, this is one helluva a good time.

To read about the FOAM PARTY is one thing. To experience it is something else. I tell people to imagine a sink filled full of foam with a tiny amount of water at the bottom. Blast some great music. Drink a few Mind Erasers. Now imagine a fork jumping around the sink. You are the fork!

The Masquerade has to my recollection been doing the FOAM PARTY since 1996. One day a week during the spring and summer months, they setup the FOAM PARTY. Wrap everything in plastic. Keep your cell phones, Palm Pilots, pagers, and electronic car door openers at home. And if you must take something of value, use multiple layers of plastic wrap. You WILL BE soaked from head to toe! 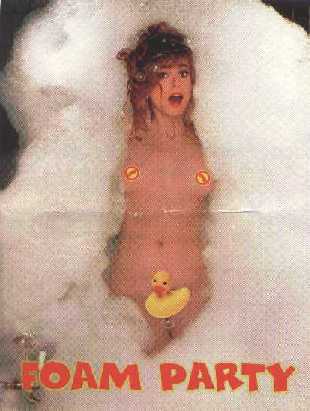 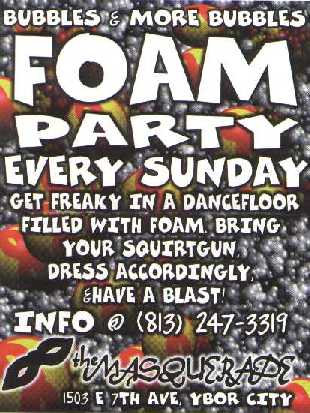 THE MASQUERADE is a great venue for music. I’m guessing it holds about 1,800, which makes it great for artists on the way up or more likely the way the down. The two concerts I saw here were LOVE AND ROCKETS and RATT. Granted that isn’t many shows for a four year period, but I’m not really a concert person anymore. 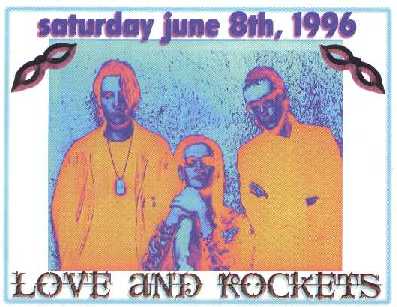 THE MASQUERADE turned out to be a great place for New Years Eve 1995. No reservation or big cover. Just come on in and have a good time. And that I did. Below is a flier from the “Prom Night” theme New Years Eve party. 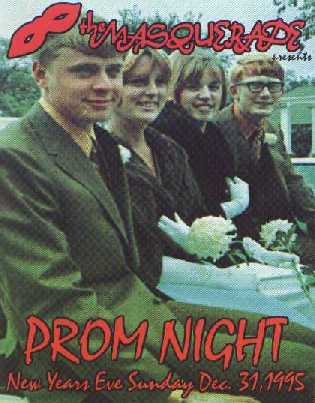 THE MASQUERADE had a great flier for a Friday the 13th theme. The other graphic is MASQUERADE MONEY. I’ve saved this money for almost 4 years now. Someday I’ll get that free cover! 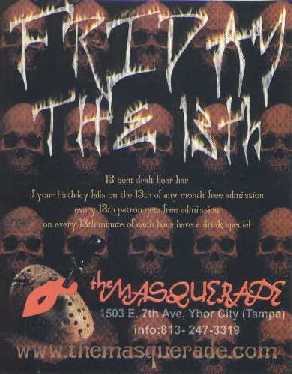 THE OAK BARREL TAVERN is the first chapter of my Ybor story. Before New World Brewing, Zion, and The Tampa Bay Brewery Company there was one place in Ybor where you could get a quality beer. That place was the Oak Barrel Tavern. OBT had about 30 imports and microbreweries on draft. After an evening at OBT, you had a beer education. Once you’ve sipped on a liter of Franziskaner, the thought of ever drinking a Budweiser or Coors again is absurd.

Wednesday night was $4 liter night and the place was always packed full of beer connoisseurs. Everyone around you was working on bocks, alts, porters, stouts, and every style beer from all over the world. Every so often you’d see Wally with his 2-liter glass boot drinking Franziskaner.

I thank OBT and Kim Carrington for leading me on the path of quality beer. Had it not been for Richard’s OBT, I might have never experienced the joy of a Double Diamond. OBT closed after legal battles between two of the partners couldn’t get resolved. Shortly after Oak Barrel closed, Richard brought liter night to the Castle. 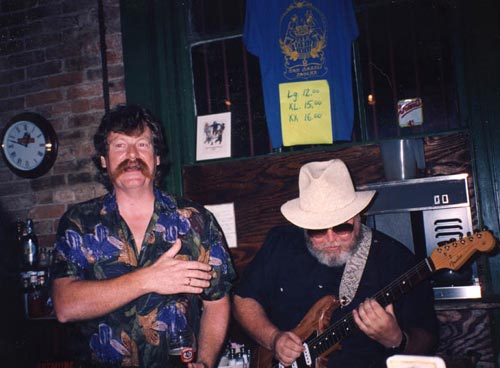 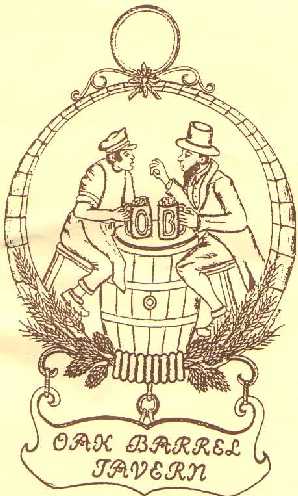 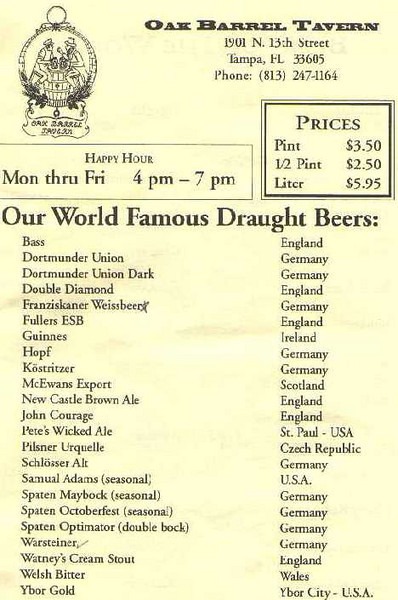 TAMPA BAY BREWING COMPANY opened in February 1997 as a micro-brewery restaurant. The food is good, but the beer is perfection. I’ve been to brew pubs in New York, Ohio, DC, and all along the coast of California. TBBC is hands-down the best brew pub I’ve ever been to. When I’m in Tampa/Ybor City, you’ll find me here. 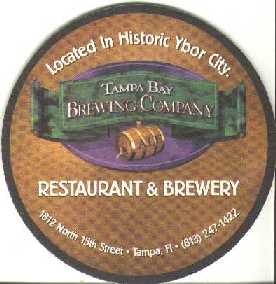 VERTIGO came and went rather quickly. I believe they only lasted from 1995 to 1996. VERTIGO was located in the spot that was vacated by SUGAR PALM BALLROOM. They had a habit of not honoring their “free” passes and people quickly tired of the rude service.