I Can’t Quit You Coke Zero

Really I tried. About two years ago I discovered Coke Zero. A zero-calorie version of Coke that didn’t taste like a diet drink. It was amazing. After going years without drinking any soft drinks, I was back to a can a day. It was zero calories and I no longer feared Nutrasweet, what could go wrong?

In February, the Economist ran a story about how low-calorie sweeteners can trick the body into being fat. From the story Sweetness and Light – Metabolic Syndrome II: obesity: (2021: Link moved)

Dr Swithers and Dr Davidson also measured the body temperatures of their charges before and during the chocolate meal. In normal animals the brain raises the body’s temperature before and during eating. This is to prepare for the energy-intensive job of digestion. As expected, those rats on the sugar diet showed a normal temperature rise. Those on the sweetener, however, showed a diminished increase in temperature, suggesting that their physiology was in some way affected.

The article goes into how repeatedly fooling the brain with low/no calorie sweeteners may interfere with the body’s ability to judge calories and the result is you end up eating more. Yikes. All I was wanted was a sweet beverage option that didn’t cost me any calories. Seems you can’t fool mother nature.

So I quit buying cans of Coke Zero. Then after several days or a week, I’d rationalize just getting one drink. A 20-ounce bottle of Coke Zero from the quickie-mart is $1.62 after tax. Since the drinks were infrequent, the cost wasn’t too much of a problem. Then the temperature got warmer and I started buying more.

So like a cigarette smoker that figures out quitting isn’t on the horizon, I decided to buy my carton equivalent. Today I caved in and bought a 24 pack. OK, I bought two, they were on sale. It’s summer. Once we head into fall, I’ll quit for real. Except for … 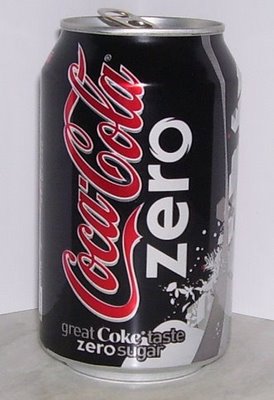