Yes, It’s Over, Call It A Day, Sorry That It Had To End This Way

Back in August, in the post I Can’t Quit You Coke Zero I confessed my reluctant love for Coke Zero. I had learned how repeatedly fooling the brain with low/no calorie sweeteners may interfere with the bodys ability to judge calories and the result is you end up eating more. Even after learning this, I was back to drinking Coke Zero. 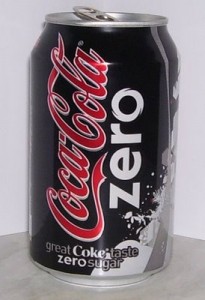 Despite trying to scare myself away from Coke Zero, I noticed that I wasn’t overweight and leaner than I was before I started drinking the beverage, so there wasn’t a call to action for me. Yes there is a risk, but I was doing great, so hand me another can.

But you can’t fool mother nature. My pal MTR sent me some information that alerted me to a much larger risk with no calorie beverages: benzene. Diet colas for years had sodium benzoate in them. It is a preservative used to prevent fungus and bacteria growth in highly acidic foods, such as soft drinks. What happens when you mix sodium benzoate ascorbic acid? From the Wikipedia page on sodium benzoate:

In combination with ascorbic acid (vitamin C, E300), sodium benzoate and potassium benzoate may form benzene, a known carcinogen. Heat, light and shelf life can affect the rate at which benzene is formed.

Professor Peter Piper of the University of Sheffield claims that sodium benzoate by itself can damage and inactivate vital parts of DNA in a cell’s mitochondria. Mitochondria consume oxygen to generate ATP, the body’s energy currency. If they are damaged due to disease, the cell malfunctions and may enter apoptosis. There are many illnesses now tied to DNA damage, including Parkinson’s and other neurodegenerative diseases, but above all, the aging process in general.

In combination with ascorbic acid (vitamin C), sodium and potassium benzoate may form benzene, a known carcinogen. Heat, light and shelf life can affect the rate at which benzene is formed. The Food and Drug Administration was performing tests in 2006, but the Environmental Working Group is calling for the FDA to publicly release all tests and use their authority to force companies to reformulate to avoid the potential benzene forming combination.

Potassium Benzoate (or E212) was recently described by the Food Commission, who campaign for ‘safer, healthier food in the UK’, as “mildly irritant to the skin, eyes and mucous membranes“.

So I’m drinking a mild irritant to mucous membranes? Sounds delicious. I just want a tasty beverage without suffering the caloric penalty. The truth is you can’t fool mother nature and when you do, you pay the price.

Next Can I Have Another Piece of Chocolate Cake?