Saturday evening I posted As Soon As I Get My Head, which summarized my thoughts and concerns on what might happen in a post-Paulson bailout world. Even though I’m hedged to profit from a stock market decline or crash, nobody is protected if we have a total banking collapse. I had a bad night sleep imagining what would happen if the $62 Trillion credit derivatives market started to unwind. The leverage that allowed us to buy homes with no money down and then see those homes double or triple in value was exciting on the way up, but it is going to sting on the way down.

Last Wednesday, I got out of all UltraShort ETFs that have counterparty risk. The Geldpress just released a good article explaining my concerns with these investments. From Proshares biggest counterparty risk is the US Government:

It is the counterparties, and not Proshares, that actually does the shorting of the market or index. And the counterparty risk associated with Proshares ETFs is the risk that these counterparties will become insolvent and not be able to pay the agreed upon inverse returns.

In other words, the market tanks and you pop the champagne cork thinking you are silly rich only to find out the counterparty blew up and you lost all your money.

After 9/11, I stocked up on canned food, water, and other items. After Katrina, I increased my stockpile. Since then I’ve moved three times and my emergency provisions have been reduced greatly. The biggest emergency situation that I have had to deal with was the San Diego fires of 2003. The fires tore through San Diego faster than anyone expected. When an emergency strikes, you can be certain that you won’t be able to stop time and run to Costco. 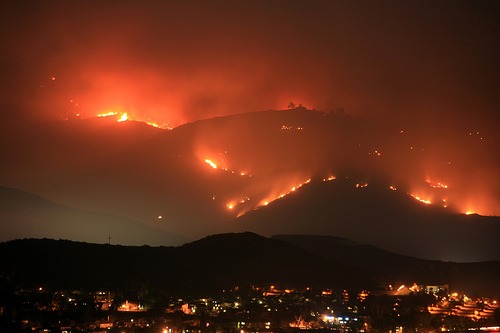 Photo of the 2007 San Diego fires from FLICKR user slworking2

We may or may not have an Argentina style banking crisis, but ignoring the possibility isn’t wise. Bad unexpected things can happen. And they can happen very quickly. After I woke up from my bad night of sleep, I asked myself what I would do if I knew a hurricane or fire could hit me in the next week or so. Here is what I did today:

Do I think something bad is going to happen? No, but if it does, I want to be prepared. Once I feel the crisis has passed, I’ll start spending the cash or re-deposit it in the bank. The food and water will be consumed. No loss. Just greater piece of mind and hopefully a better night of sleep tonight.