Satisfaction – The Science of True Fulfillment

Last week I was poking around my library looking for something else when I stumbled onto this book. 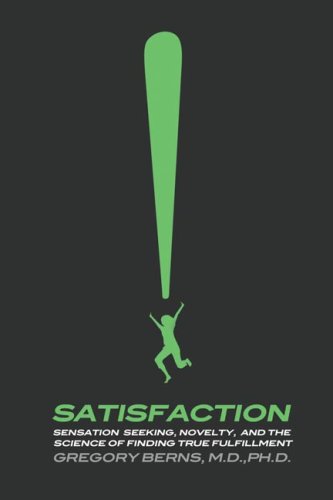 Satisfaction: Sensation Seeking, Novelty, and the Science of Finding True Fulfillment by Dr. Gregory Berns was better than I expected. He took a topic as geeky as brain chemistry and turned it into an adventure. He went from Iceland to a crossword puzzle competition to an endurance race and more on a quest to solve the riddle of satisfaction. Along the way, he set up tests and helped the reader understand the science stuff.

Satisfaction is not the same thing as happiness and that is key to this book. Happiness can come whenever. Satisfaction requires action and some novelty. Humans must connect their actions to the result in order to achieve satisfaction. Ice cream might make you happy, but unless you made the ice cream yourself it might not result in a feeling of satisfaction. And if you’ve made ice cream hundreds of times before, it may not have the novelty and thus its potential for giving you satisfaction.

Too much novelty is stressful and too little novelty results in boredom.

Satisfaction was a satisfying read. I also plan on checking out Dr. Gregory Berns’s new book Iconoclast: A Neuroscientist Reveals How to Think Differently.