Last week I went back and read How to Eat, Move and Be Healthy! for a second time. I gave a positive review to Paul Chek’s book back in October 2008. I rarely read the same book twice, but I got an idea in my head about the failure of classic weight training programs and I wanted to review something I remembered seeing in that book. 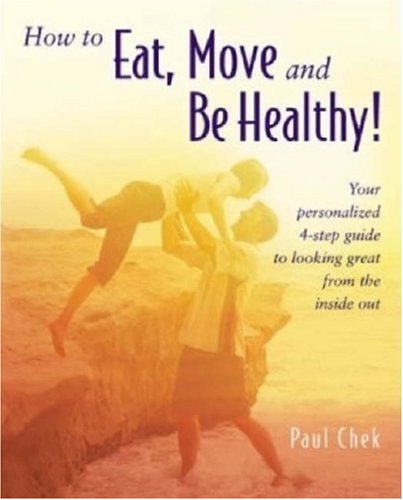 Almost all weight training programs treat the human body like a butcher treats an animal. Workouts are broken into muscle groups. Do legs on Monday, Chest on Wednesday, and Back on Friday. Or something similar. Now isolation movements make this more obvious, but even compound movements tend to be focused around muscle groups. How does this fit in with an evolutionary model?

In the book, How to Eat, Move and Be Healthy! author Paul Check takes a different approach. The body has 7 Primal Movement Patterns. He lists these as:

The exercises are then constructed based on that primal movement and not the muscle group. I totally missed the importance of this distinction on the first read. It is possible to do a classic muscle group workout without engaging all the primal movements. For example, I injured myself on both the squat and dead-lift, so I have figured out alternate exercises for my legs and back. The problem is I no longer do the SQUAT or BEND Primal Movements. And I don’t think I’ve ever done any exercises for the TWIST movement. The result is I’ve gotten A LOT stronger on movements such as PULL (pull-ups, 1-arm rows) at the expense of other movements. That’s a problem.

I don’t think I am alone. We tend to do more of the things we are good at and as a result, we get better at the things we are already good at. The downside is we shy away from the movements we are weak at and the result is fragility builds up over time. Once I started getting good at pull-ups, I did fewer bending exercises. Now I’ve built up such an imbalance that is easier for me to do a set of weighted pull-ups than bend down to put dishes away on the bottom shelf. Not good.

My goal now is to focus more on the movement and less on the muscle group. This week I started doing TWIST exercises using cables. Next week I’ll add in some BEND work and the week after I’ll go back to SQUAT. I’ll let you know how it goes.

Next The Best Coffee in Downtown Seattle (2010)