Cognitive Surplus: Creativity and Generosity in a Connected Age

This book would have been great four years ago. 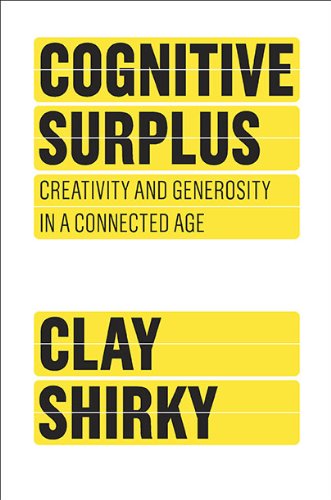 Cognitive Surplus: Creativity and Generosity in a Connected Age by Clay Shirky was released the same week as Nicholas Carr’s The Shallows and promoted as the pro-Internet argument to Carr’s warnings about how the Internet is rewiring our brains.

Cognitive Surplus is a slow boring tedious explanation of the social sharing Internet we know today. Many of the examples used in the book come from other popular non-fiction books such as Drive, The Talent Code, and Predictably Irrational. Very few ideas in this book were new to me. This book would have been much more useful had it been released in 2006 when primarily early adopters were engaging with social networking. This book was dated the day it was released.

If you experience the audiobook version of Cognitive Surplus, look for a setting on your player to speed up the audio. The reader speaks intolerably slow. When the subject is complicated, I don’t mind a slower reading. At double speed, this book still moved too slow for me.

Having read both The Shallows and Cognitive Surplus, I can now participate in this debate. They are both right. Shirky is absolutely right that we as a society are now using our free time to share and participate in social media for the benefit of all. Carr’s concern that we are becoming easily distracted and deep thought is becoming more difficult are also true. The benefits that Shirky lays out don’t come without a cost. Both books are right. We need to find a way to strike a healthy balance. If we don’t, someone will design software that will harness our cognitive surplus. Those intentions may be useful or as Carr says they could be “digital sharecropping“.

Despite the fact I felt Cognitive Surplus was about 3-4 years out of date, I did find the tips in the last chapter on creating social networks to be valuable. Shirky is an engaging speaker. My advice is to watch his videos and unless you are completely clueless about social networking avoid this book.

Next Fall Strategies For Nutrition and Fitness

Previous The Problem With WordPress and How I Would Solve It