Although I plan to do a full review once I’ve finished reading the 4 Hour Body, I have to stop and comment on the chapter From Geek to Freak. In this chapter author Tim Ferriss gained 34 pounds of muscle in 28 days. It is a trick and I’m going to tell you how he really did it. 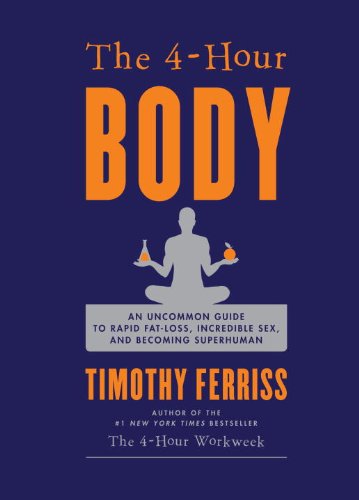 Before I expose the trick, let me say that I believe everything Tim posted about having his measurements validated by the Human Performance Laboratory. I also agree that his training and eating protocol are solid programs for mass gaining. It’s the expectation that bothers me. Gaining 34 pounds of muscle in a month is not even close to being a realistic goal. I wish it were.

#1 The Easiest Way to Gain Muscle is to Regain Muscle

Gaining a pound of muscle is hard work. It is far easier to let an existing pound of muscle atrophy and then regain it. Anyone that has had an arm or leg in a cast knows this to be true. Did Tim gain new muscle or regain lost muscle? Let us put together the clues on Tim’s true weight. From page 183.

I weighed 152 pounds throughout high school, but after training in tango in Buenos Aires in 2005, I had withered to 146.

The implication here is that Tim was weight stable at 152 and then dropped 6 pounds. But that isn’t true. In Tim’s first book The 4-Hour Workweek, he openly discussed weight manipulation tricks he used in a 1999 kickboxing competition.

Using dehydration techniques commonly practiced by elite powerlifters and Olympic wrestlers, I lost 28 pounds in 18 hours, weighed in at 165 pounds, and then hyperhydrated back to 193 pounds.

By not stating the extreme weight fluctuation between high school and the start of the experiment is highly misleading. Since high school, Tim had gained and lost a significant amount of muscle. The easiest way to gain muscle is to regain muscle. I covered this in the post How Mickey Rourke Gained 27 Pounds of Muscle For The Wrestler. In that post, I dropped in a quote from the Journal of Applied Physiology.

data suggest that rapid muscular adaptations occur as a result of strength training in previously trained as well as non-previously trained women. Some adaptations (fiber area and maximal dynamic strength) may be retained for long periods during detraining and may contribute to a rapid return to competitive form.

Tim’s trick was Mickey Rourke’s trick. Gain a bunch of muscle. Let your muscles atrophy. Take some before photos at a ridiculously low weight and then regain the muscle quickly. The problem with this chapter is that most of the readers are not in a position to regain what they never gained in the first place. This is why Neil Strauss gained 10 pounds of muscle in his 4 weeks and not 34 pounds. Ten pounds is commendable and it is more realistic for an untrained lifter who is working out hard and eating like crazy.

I have legally used low-dose anabolic steroids and other growth agents under medical supervision both before and after joint surgeries.

Has he used any other steroids? Ever? Legal where? How long before? How long after? That sentence seems like an awkward way to end a path of questioning. I don’t know if Tim Ferriss ever took anabolic steroids outside of his joint surgeries. The way that sentence was written makes me suspicious.

Anyone remember the original Body For Life contest back in 1997? A few of the male competitors made amazing transformations in 12 weeks. So much so that when pressed they confessed to prior steroid use. At the time I was living in Florida and I met a bodybuilder that was working on getting into the Body For Life contest. He stopped taking steroids and stopped lifting weights. He was working on his before photo. He knew that regaining his muscle would be no problem for the contest.

How Tim gained the muscle from high school to 1999 is the least relevant part of this story. I only bring it up because this is the part some people will focus on. Muscle is muscle regardless of how it is built.

Here is a secret that the supplement companies don’t want you to know about. It has to do with how lean body mass is calculated. By super-hydrating, you will increase your lean mass. Brad Pilon exposed how this was done in a video last year. In a single workout, he was able to increase his lean mass by 8 pounds. The gain was all water, but since none of it was fat, it is counted as lean mass. Not lean muscle. Lean mass. This is one trick used to sell muscle gaining supplements.

How I Gained 8 lbs of LEAN MASS From Just 1 Crazy Workout (JAN 2020: video no longer on YouTube)

Using dehydration techniques commonly practiced by elite powerlifters and Olympic wrestlers, I lost 28 pounds in 18 hours, weighed in at 165 pounds, and then hyperhydrated back to 193 pounds.

Putting it All Together

Tim’s weight by his own words went from 152 to 193 back down to 146. He then gained 34 pounds of muscle in 4 weeks. No, he didn’t. He regained it using some combination of lost muscle from previous gains and hydration. One summer I had my left leg in a cast. I lost a lot of muscle, but once the cast came off I made miraculous muscle gains. There was no miracle. It was just my leg returning to where it left off before the cast. Tim’s experiment was a grand version of the same thing.

I’m not a hater. I am a fan of Tim Ferriss. He is the brother I wish I had, however, this chapter is a hoax. Gaining muscle takes time and effort. Once you get past your beginner gains, it can be a slow process. Don’t be fooled by ridiculous claims. It is usually someone trying to profit from your desire to take a short cut.

Next Tales From the Glitter Gym – The End