The Age of Deleveraging

I just finished reading a book from one of my financial mentors. 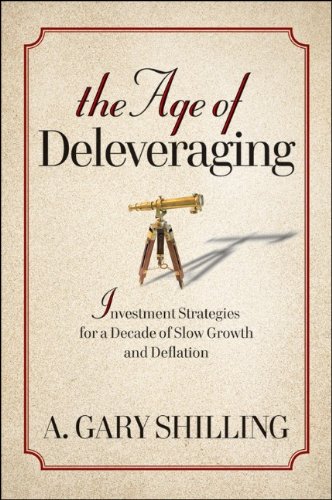 The Age of Deleveraging: Investment Strategies for a Decade of Slow Growth and Deflation is by A. Gary Shilling. Back when I used to spend hours every day watching the clowns on CNBC pump their fists about how great everything was, there were few voices of reason. One of them was Gary Shilling. Like me, he saw early on how the housing bubble was not just a subprime issue and how the losses would go beyond housing and damage the financial markets. That was a very unpopular opinion to have during the drunken days of the housing bubble.

The Art of Delveraging begins with Gary telling us about the 7 great calls he made during his career. Some Amazon reviewers seems to take issue with his bragging. I don’t. Gary has been successful because he often went against the consensus. This invites attacks right up until the moment you are proven right. I don’t know how many times I saw other financial experts rudely berate Gary on CNBC. He always kept his cool and came off as a true gentlemen. He earned my respect. If after ~50 years in the game he wants to write 100 pages saying what he got right without being interrupted, then God bless him.

Hopefully other readers will savior the wisdom of the 7 great calls. This is how a great researcher sized up the economic landscape at different points in our history. His greatest call in my opinion was buying long-term Treasury bonds from the very early 80s to the depth of the 2008-2009 financial crisis. In the early 1980s inflation was very high and so were interest rates. Shilling’s research showed that while everyone else was expecting more and more inflation that the opposite was true. By investing in high interest bonds, the value of your investment goes up when interest rates fall. And that is exactly what happened.

Most investors find Treasury bonds boring, because they focus on the interest. Gary focuses on appreciation. He writes:

A decline in yields from 4.0 percent in July 2010 to 3.0 percent may not sounds like much, but the bond price would appreciate 20 percent. If it occurs over two years, then two years’ worth of interest is collected, and the total return on the 30-year Treasury would be 28 percent. One a 30-year zero-coupon Treasury, which pays no interest but is issued at discount, the total return would be 34 percent.

If you’ve been actively following the banking and housing crisis over the past few years there are sections you might want to skim through. But for others, this book also serves as a great concise economic history book for the last decade.

Gary Shilling has been in the deflation camp since the early 1980s and is still there. After he makes his case for further deflation he concludes with 12 investments to sell or avoid and 10 investments to buy in the coming decade. This book serves as a good balance between the frat boy everything-is-wonderful nonsense in the financial media and the get-your-gun-the-end-of-the-world-is-near message coming out of the financial blogosphere.