Several people have asked that I post an updated kimchi recipe. I’ve learned a lot since my original Bok Choy kimchi recipe was posted. One of the things I learned is there are infinite ways to make kimchi. In this post, I want go over the basics for creating your own custom kimchi recipe. It is not meant to be complete, but instead serve as a foundation for beginners.

The most common ingredients I’ve used include:

Chop Up the Cabbage

The cabbage should be cut into whatever sized pieces you want to eat. Traditional kimchi will often have very large pieces. The smaller you chop, the easier it will be to pack the jar later. There is no wrong answer.

To make sure the good bacteria win the battle against the bad bacteria, you’ll be mixing the sea salt into the cabbage. There are 2 techniques that I am aware of that accomplish this.

How much salt should you use? If you look at other recipes, you will see wildly different salt recommendations. Who is right? They all are. I’ve done lower salt and higher salt and they both taste good. Currently I am using a little more than 1/2 tablespoon per pound of cabbage.

If you have salt concerns, I have read recipes that suggest gently rinsing the cabbage after you’ve rubbed in the salt and allowed it to sit for a few hours. They say that the salt has done its job and can be rinsed. I have not tried this, so I can not comment. The salt has never bothered me. The Fermentation Workshop DVD mentions that you can use seaweed in place of salt.

Add The Other Ingredients

Some recipes say you should put the other veggies in with the cabbage when you add the salt. I don’t do that. I use the time the cabbage is softening as my time to prepare the other ingredients. Chop everything however you like, however I do have a few tips.

Mix and Pack in Jars

Mix all the ingredients and pack tightly into jars. Make sure there is about an inch of room at the top. You also want to make sure all the veggies are underneath the water. Fermentation is anaerobic. If the veggies peek their head out then the bad bacteria could be invited back. This is a minor concern with kimchi, but important with longer ferments like sauerkraut. 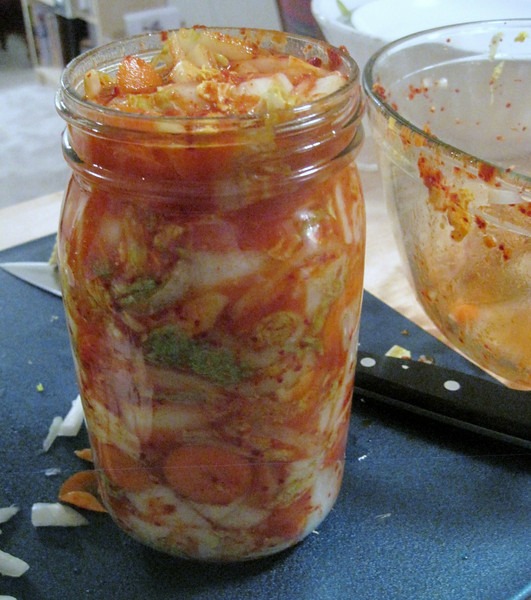 Push those veggies down. They need to be below the liquid.

For more ideas on managing multiple or larger ferments read the post My Fermentation Station.

Pushing Down the Kimchi

Most recipes use some sort of weight (crock) that sits on the top. This keeps the veggies under the liquid for fermenting. Another option is to do what I do. Twice a day I push the veggies down. Doing this triggers a release of bubbles to the surface. I’m not against using the crock method, it is just that I don’t have one that works well with my jar. 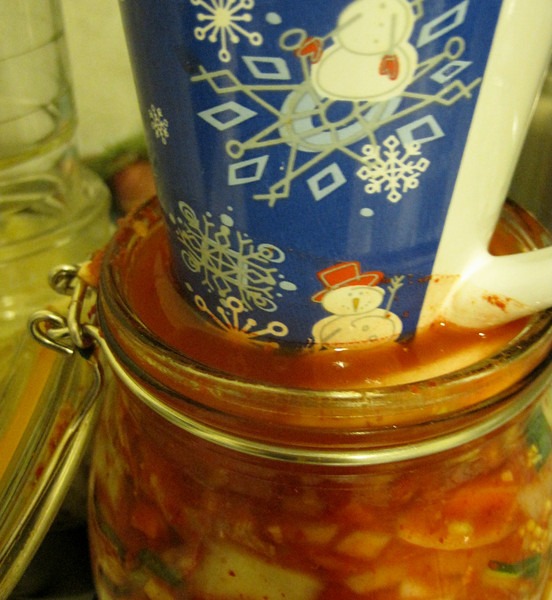 Here I am using a coffee mug to push down the veggies.

Leaving the Kimchi to Ferment

You will want to put a plate or bowl underneath your kimchi jar, as the juices can over flow. You’ll also want to cover the jars with an old towel or upside down paper bag to prevent light from hitting it. The best temperatures I’ve found for ferments are in the mid 60s to low 70s. Once it get warmer than that the fermentation speeds up, so you’ll want to add more salt to slow things down. Cold temperature ferments are the more the traditional ones that take much longer.

This leads us to the question on how long to ferment? Recipes online range from 2 days to months. I have found 6 days is my usual ferment period. Some things to consider:

I highly recommend tasting as you go. By eating a small amount at different points during the ferment, you will learn the taste profile that you like best. Once the fermentation is to your liking, just seal up your jar, wipe it down and put it into the refrigerator. This slows down the ferment. Good luck!

Next Power To The People – 10 Years Later

Previous The Age of Deleveraging