For the past year I’ve been trying to figure out the mystery on why some of the glass canning jars I put in the freezer shatter and others don’t. At first I thought I overfilled the jars with too much stock. So I lowered the liquid line, yet the breaks continued. Then I thought the plastic lid was the problem, so I used the metal ones. Still more breaks. Then I tried pre-cooling in the refrigerator first. That didn’t fix the problem. Then I tried different areas of the freezer and even tried it lidless. Again they shattered. 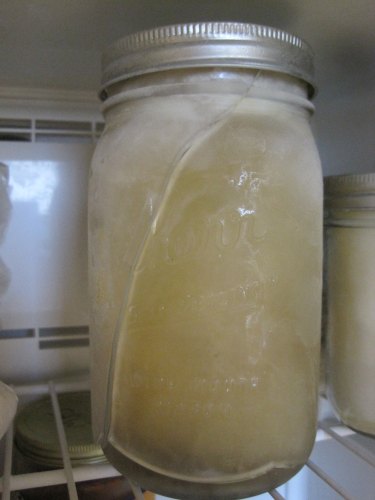 Another shattered canning jar in my freezer.

At this point, I thought the case of jars I got was defective was so I reached out to Jarden Home Brands, the makers of Kerr jars, to see if they solve this riddle. Their advice was so valuable that I thought I’d share it with anyone that has the same issue that stumbles upon this page. Here is what I learned:

Look at the photo above. The broken jar has rounded shoulders. The little jar to the right doesn’t and it didn’t break. All my old glass almond butter jars have a straight design and as a result, they have never broken in the freezer. My guess is the only way to prevent the rounded shoulder jars from breaking in the freezer would be to fill them to just below the rounded shoulder. I don’t plan to test that theory though, as I’ve lost too many good jars already.

Next 3 Minutes to a Pain-Free Life