My name is MAS and I’m a caffeine addict.

For the past few years, I have been deluding myself that my relationship with caffeine was healthy. When I mention that on a typical day I only consume 3 or 4 espressos, some people are shocked. Then I explain that back in my San Diego days I used to consume 5-6 mugs of french press coffee a day and those mugs were 16 ounces. By comparing my current intake to the amount I was consuming just a few years ago, I was able to trick myself into believing that I had made great progress in curbing my caffeine addiction.

When I switched from french press to espresso, my caffeine intake did go down. But this also about the time that I started getting an appreciation for quality loose leaf tea. These days I consume about 4 mugs of tea day. Overall my caffeine intake is lower, but not by as much as I thought. My sleep is better, but that is probably the result of not drinking coffee in the late afternoon or evening and not directly a result of lower total caffeine.

Is comparing current caffeine usage to past caffeine usage a useful metric? That question has been bothering me for a while. This week I conceded that it is wasn’t. The fact remains that I am equally addicted to caffeine albeit at a lower level than before. My addiction might even be greater because today I am consuming espresso that is far better quality than just a few years ago. The strides I’ve made in my home roasting and shot pulling at home have improved a lot recently. By collecting more data and interviewing the best baristas in Seattle, my home espresso quality has improved more in the past 9 months than in the first 9 years I was making coffee. Every month or so my coffee tastes better than it did before. This is making my addiction stronger. 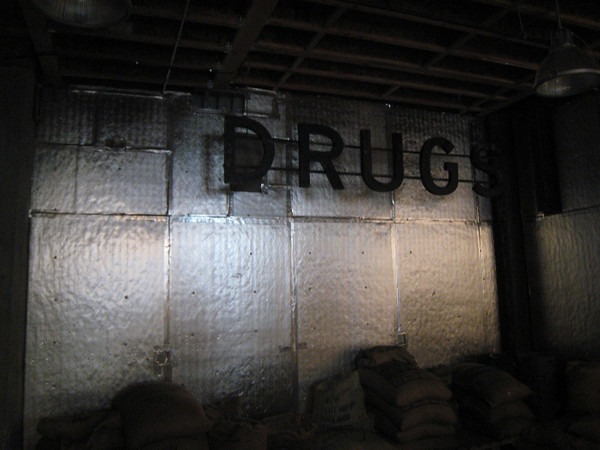 The DRUGS sign at the Seattle roasting facility for Stumptown Coffee (12th Ave). So true.

In 2011 I went 14 days without coffee, but my detox was flawed. First off, I was still drinking tea. Also, because I switched to decaf I was still getting the flavor stimulus. So I never went a day without caffeine or the taste of coffee. I built in a loophole in the very test I created. Now I see that the flavor stimulus for me is equally as addictive as caffeine, I know I can’t use decaf to detox.

The only real 100% caffeine and coffee-free detox I did was way back in 1997 when I lasted 100 hellish hours. That was before I started home coffee roasting or had a real burr grinder. Even when I visited coffee hostile locations such as South America, Southeast Asia, and New Orleans, I still acquired caffeine every single morning and most afternoons. So caffeine has played a role in my daily life for 15 non-stop years or approximately 5,475 consecutive days. And if you exclude those 4 days in 1997, you can add another decade to that number. This can’t be healthy.

Beyond the caffeine and the stronger flavor signals, coffee and tea both now have strong social links for me. I am the organizer of the Coffee Club of Seattle which meets an average of twice a week. This year I’ve had 160 espressos from Seattle area coffee shops. Yes, I have a spreadsheet. 🙂 This doesn’t count non-espresso drinks or the coffee I consumed when I was out of town. And it definitely doesn’t count the drinks I made at home, which is a much larger number. Much of my social fabric since moving to Seattle is based upon coffee or began with coffee.

I need to know who I am without caffeine. This isn’t going to be easy. Tuesday morning I woke up after a perfect night of 8+ hours of deep sleep. I decided I would wait a while before making coffee. I should have been ready to take on the world without caffeine, but I couldn’t. My head wanted coffee. Even though I was fully rested, I was mentally paralyzed. That is when I knew I had to do a real detox, but this one will require more planning because I need to break the addiction at every level.

If this post lacked my crisp writing style it is because I’m already in a funk from cutting back on the caffeine. I’m not getting caffeine headaches, just a sharp decline in mood. It feels more like a breakup than a withdrawal. I’ve doubled my L-Tyrosine to no effect. Yesterday I left the headlights on in my car and ran the battery dead. Later I left the house with the oven on and burnt a 3-pound meatloaf. There may be fewer posts or suckier posts in the next few weeks.

Previous Lab on a Chip