Readers of this site already know that I dislike the bench press. After benching for 16 years, I gave it up for machines done either very slow or with static holds. I outlined my case against the bench press in the post My Bench Press Sucks and I Don’t Care. Although I felt I made a strong case, in this post I want to cover two important topics: skill and risk.

The Bench Press is a Skill Movement

In the Fat Burning Man podcast episode with James Clear, host Abel James dissed machine based weight training. His explanation was that when he returned to the bench press he found he couldn’t lift as much weight. He came to the false conclusion that Nautilus was therefore ineffective for building strength. No. Nautilus is perfectly fine for developing strength. What it is not good for is developing the skill of bench pressing.

The bench press is a highly skilled movement. Yes, there is a strength component, but doing a perfect bench press repetition takes practice. When you stop bench pressing, you stop training that skill. When you return to the bench press, your numbers will be lower. That doesn’t necessarily mean you’ve lost strength. It just means the skill portion of that lift is rusty. Usually your numbers return quickly if you continue to practice. His guest James Clear used a single exercise protocol to do just that.

To demonstrate just how much skill is a factor, I’ll provide an example of the opposite. After a decade of bench pressing, I was able to increase my bench by 30 pounds in a single week. Did I gain 30 pounds of strength? No. I read a really well written article about elbow position for tall lifters. After reading the article, I went to the gym and tested it out. My SKILL in the bench press went up by 30 pounds. My strength was the same.

The beauty of Nautilus or other machine based equipment is they remove the need to learn a skill to perform a safe repetition. The user can focus 100% on building strength. Machines get a bad repetition for two reasons. First, people move the weight too fast. This is what Arthur Jones called “throwing weights”. Second, lifters equate the machine movement with the free weight exercise and because the machine is easier at the same weight, it is perceived as being less effective. The reality is they are different exercises and should be treated as such.

Since giving up the bench press over two years ago, my chest strength is greater, but if I tried to perform a bench press today that number would likely be lower. Two separate things. I no longer need to hold onto a number to quantify my strength. It is quite liberating. 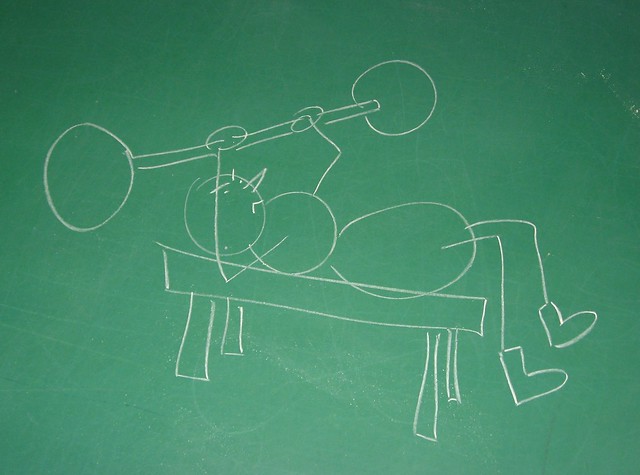 Greater Risk for Greater Reward? I Don’t Think So.

No risk… no big reward. Use the machine or don’t do bench… then you’ll never see your true potential.

The bench has risks yes. Don’t do it if it scares you. I’ve benched for 30 years and I love it. I’ve also had many injuries and even shoulder surgeries. I’ll never stop until I can’t do it. It the same with squats and other exercises.

Life is adventure live it up… or stay safe.

This is the kind of bravado nonsense that causes so many injuries in the gym. Mike isn’t alone. There are a lot of successful lifters that feel exactly the same way he does. Let me dissect this pro-bench argument point by point.

You study other men and you find out what makes them weak and then you don’t do that. – Jay Leno

The way to win in the gym is to not lose. Don’t confuse skill with strength and respect risk. By the way, this article was about the bench press but it applies to the squat and dead lift as well.

Next Neck and Shoulder Fixes – One Month Report

Previous My Plan for the “Turn Up the Heat” Experiment