A year ago, I made pho for the first time. Since then I have been making it regularly and hacking away at the recipe to make it faster and better tasting. Fewer steps and minimal ingredients. I’ve seen other Quick Pho or Faux Pho recipes online. They are a good start, but I believe mine is even easier.

The key is Chinese 5 Spice, which includes two critical pho flavors: star anise and cinnamon. I discovered this by accident when I started making pho one day and I realized that I was missing some spices. I pulled down my Chinese 5 Spice and checked the Wikipedia and the rest is Pho history. 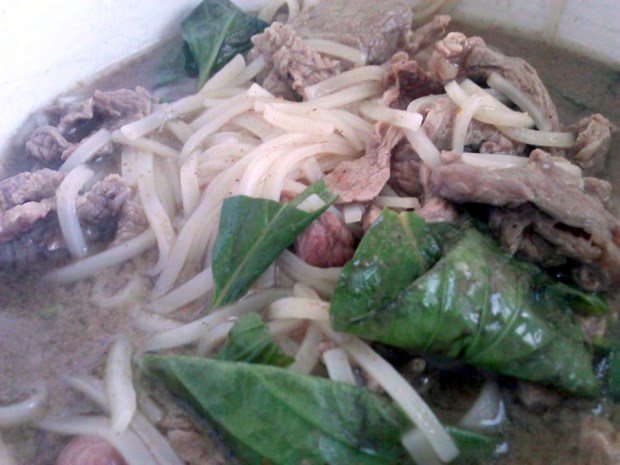 Faster Pho – Not a great photo, was taken with a phone.

How much meat or noodles you use is up to you. I vary their ratio all the time. It is all good. Also, you can use other cuts of beef. Keeping it simple with the thinly sliced beef. It also cooks the fastest.

Less than 20 minutes and you’re done. What makes pho traditionally take longer to make is the care and attention paid to the broth. The Chinese 5 Spice is the hack that reduces that time. Now I make this recipe using my homemade beef stock. I’ll be interested to hear from others in the comments that try this recipe with store bought boxed broth.

And yes I realize that I did not include roasted ginger. My homemade broth is pretty awesome, so I didn’t find it added much to the flavor, so in an effort to make the recipe faster, I removed that step. I suppose one could always toss some ginger into the broth after Step 2. Your call.

One additional tip is because the basil tends to go bad first, get the basil as close to the time you are making the recipe as possible. Also, I’ll sometimes make pho 3 days in a row. As long as I still have basil and beef, I can always make another bowl of Faster Pho.