Wednesday night I got a chance to listen to author David George Gordon talk about eating bugs. After the talk, I joined the bug buffet and ate some bugs myself. I’ve owned the 1998 edition of his Eat-A-Bug Cookbook for a few years now. At the event, I learned a new and expanded 2013 edition was released. 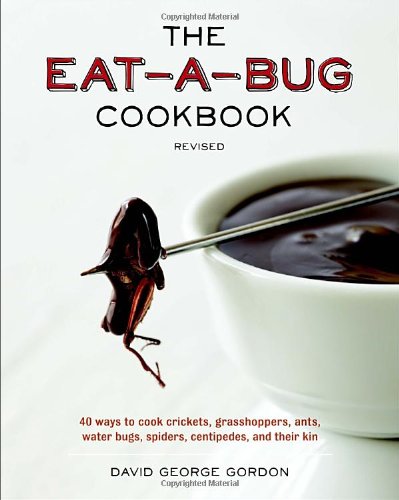 I didn’t buy the new version. Although I have zero issues with eating bugs, sourcing them has always been a challenge. With the exception of silkworm larvae (aka “ground cucumber”), which is sold in the Vietnamese grocery stores, I have not seen any insects sold anywhere near Seattle. For the record, I’ve been up and down the aisles of most Asian grocery stores from Lynnwood to Federal Way.

The 2 on the stick tasted like sauce. The locust (upper left) had no flavor. The mealworms (upper right) were the best. They did have a slight crunch. The real little ones in the flan (bottom left) were so small and covered with sugar that I couldn’t taste them. None were as good as my bug soup.

My hunch is to make this way of eating sustainable and affordable, one would have to start home ranching. Even the package of silkworm larvae costs $3.50. Considering how few calories a package has, it really isn’t worth buying for anything more than a novelty in the United States.

Previous Was I Wrong About Gluten?