Getting More or Getting Nothing

Very shortly after my neighbors and I learned the new owners were going to evict all the tenants, a group was formed to fight the new developers. I wasn’t sure what the group was going to do. We were renters. The new owners wanted to make capital improvements to their property. In order for those improvements to take place, we had to leave. They owned the property. Most of the tenants were no longer on a lease and instead were on month-to-month options. And they are under no obligation to continue leasing units forever. This is a risk a renter takes.

To learn more about what this group was thinking, I went to an early meeting with a large number of my neighbors. From the start, it was clear that their approach to the displacement would be conflict. They would be a thorn in the side of the new owners and maybe just maybe we could save our apartments from the developer upgrades.

I disliked the tone of what I heard. They were anti-development and pro-rent control. I see the developers that are coming to Ballard to either build new construction or upgrade existing structures as responding to market pressure. That isn’t greed. That is business. Our apartment complex is over 60 years old. At some point, it will need capital improvements made. I believe in property rights. They encourage investment. I’m grateful there are developers out there building places I can rent. Rent control is an awful economic idea that discourages investment because it weakens property rights.

The problem with the high rents in Ballard isn’t caused by the developers. It is due to high demand. Developers are part of the solution. We have a rental shortage. This action will absolutely inconvenience me, but such is the risk of renting. When I was a homeowner, I had different risks.

From afar I’ve monitored how the group “negotiated” with the developer. They used techniques such as picketing, marching, insults, and personal attacks. At one point they even posted wanted signs with photos of the developers around the neighborhood.

I wonder what the leaders thought this would accomplish? Did they think the developers were going to stop the project after they were insulted?

Being hostile and emotional even when you feel you are morally right is not an effective way to negotiate. From the outstanding book Getting More: How You Can Negotiate to Succeed in Work and Life by Stuart Diamond:

With negotiation, you need to be aware of the needs of the other party. The developers had needs, but no one asked that question. More on that later. 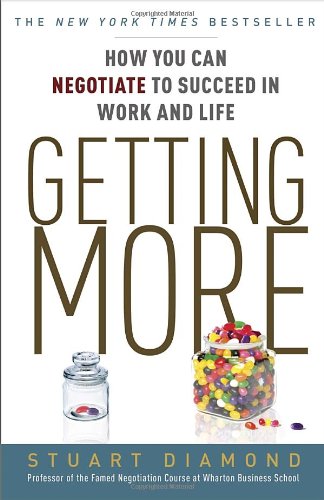 Getting More: How You Can Negotiate to Succeed in Work and Life by Stuart Diamond is an outstanding book. Life is a negotiation. Learn how to do it effectively.

Economics, The Law and Reality

Before I outline how I would have negotiated with the developers, I first want to empathize with those tenants that feel they were wronged. Ballard in recent years has become a very desirable neighborhood. A lot of people want to move here. Many of those people who want to move here are willing to pay more than they would have in recent years. This demand has created a shortage of rentals, which has pushed rental costs up.

New construction will almost always demand a rental premium. It is the high rents that pay for development. An industry report that I mentioned in the post Ballard Rents – Don’t Believe the Hype! states that new construction typically gets a rent premium of 40%. The flipside to this equation is that as buildings age they lose that premium. And since buildings do not last forever, there must be a steady supply of construction to not only keep up with population demands but the wear and tear of construction itself. Nobel prize-winning economist Robert Shiller touched on this in his book Irrational Exuberance.

The timing sucks for the tenants of my apartment complex, including myself. We are being displaced at a time when supply has not caught up with demand. It absolutely will cost more to stay in Ballard. The good news is I do think the builders will overshoot at some point and rents will come down, but not in time for us.

Some have stated or implied that the developers have broken the law. If that is the case, then go to court. Although legal mistakes were made early on by the developer, I don’t see evidence that their current plans are illegal. You may not like the laws, but one would assume that a successful corporation has a talented legal staff on hand to guide them through development projects. It probably isn’t too likely that a handful of tenants will know the law better.

The reality is the tenants are being displaced so the developers can make capital improvements to the property. They will raise rents, not because they are evil, but because that is what the market wants at this time. You can argue with economics and the law, but the development will continue.

How could both parties have benefited from this situation? I have an idea. When the plans for eviction were announced in October 2013, almost all the tenants were off lease. They were paying month to month. This means they could leave with 20 days’ notice. Once the eviction was announced, the owners couldn’t write any new leases, because a tenant under lease can’t be evicted to make way for the new construction.

The worst financial case for the developer would have been had every tenant given 20 days notice in early October. There lies the point of potential negotiation. We can’t stop the development, but we could have tried to collectively negotiate a lower rent to stay until the construction comes for our building. And before someone says you can’t negotiate rent, that isn’t true. I have lowered my rent and the rent of friends several times.

I heard a few months ago that half the tenants left on the news and the current vacancy rate is 57%. My rent is $875 a month and there are 138 units. Let us assume for easy math that everyone is paying the same rent. I don’t have a building schedule in front of me, so I’ll use 8 months as the average time a tenant had to leave. Some are sooner, some are longer.

For even math, I’ll use a 50% vacancy rate. This means the developers lost $483,000 in potential rent when tenants bolted. That also assumes the development has no delays. If delays happen the number will be higher.

What if collectively we would have negotiated for a $200 a month rent reduction to stay? We could run a spreadsheet on the scenarios, but the net benefit to the average renter would have been $1,600 (8 months * $200). What about the builder? Let us say 20% of the tenants took off leaving an occupancy rate of 80%.

In that case, the builder comes out $113,160 greater assuming the project has no delays. For every month the project is delayed, they would collect $74,520 in rent. These are all back of napkin calculations. I don’t have all the data about rents, building schedules, and vacancy rates.

The $200 was the first number that came to mind. It is a starting point to a conversation.

I believe there was a path that could have benefited both parties. But it wasn’t taken. I probably should have asserted myself early on, but my pro-development, anti-rent control opinions would not have been accepted. They were angry and they wanted their voice heard. They talked about negotiation, but in the end, they got nothing.

Once again, I highly recommend the book Getting More. I only wish I had read it sooner in life.

Next The Rise of Superman

Previous The 10 Health Myths Article Gets One Wrong