Would I Still Buy a Chromebook?

I promised I would do an update on my post from April 2014 titled I Love My Chromebook. At the time I said:

Penny for penny, the Acer Chromebook C720 is the BEST piece of technology I’ve ever owned.

I still agree with that statement, although the Kindle Fire is damn close. However, technology changes quickly, so although I would absolutely still buy a Chromebook, it isn’t perfect. Before I go into what I have found lacking, I want to cover how I was able to do things I didn’t think possible at first using a Chromebook. 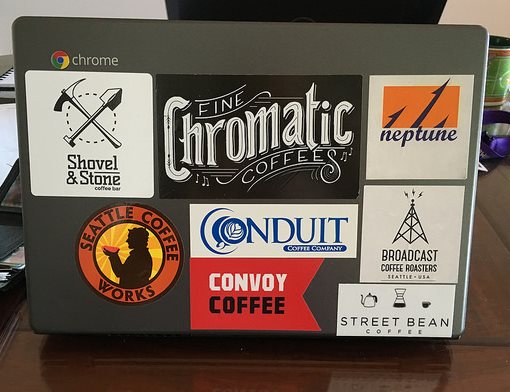 My Chromebook now has some coffee stickers!

Pixlr Editor is a godsend. A browser-based photo editing tool that is not only free but doesn’t even require an account. Many of the images you see on this blog or INeedCoffee in the last two years were likely touched up there.

If you have web hosting, many providers offer phpMyAdmin, which is a poorly named tool that helps you manage MySQL. Why didn’t they name it phpMySQL? Anyway as good as it is, I absolutely love DbNinja. You place the code on a hidden folder on your website, connect databases, and query away. All free and secure.

One weekend I tested about 5-7 database management tools, DbNinja even though it was browser-based, beat every single one. No Windows or Mac needed.

UPDATE July 2021: DbNinja site is down. Not sure if it is still supported.

There are a few online coding IDE environments that are very impressive. I made some progress using Cloud 9 and CodeAnywhere, but not as much as I wanted. As great as they were, I found coding on my PC desktop using a local web server and Visual Studio Code to be easier for me.

Where the Chromebook Was Lacking

I got way more than $200 use out of my Chromebook and I continue to use it daily, but if you only can have one laptop, there are a few limitations I found.

In my original Chromebook post, I was happy with the 2 GB of RAM. And it was fine for a long time, but the more I pushed my Chromebook, the more it started to hang and crash. It could be a sign my Chromebook is getting old or that websites are now pushing more and more client-side code onto browsers. Or both.

Anyway, absolutely get 4 GB or more RAM. The good news is you can now get much faster Chromebooks with 4 GB of RAM for the same price or less than what I got back in 2014.

I understand that a Chromebook can not install any programs and that includes Skype. But Google blocks Chromebook users from accessing the browser-based version of Skype. I know they want us to all use Google Hangouts, but this seems wrong. What if Microsoft blocked a Google product on Windows?

UPDATE: See Dan’s comment below for a better explanation of why Skype is not on Chromebook and how it may be coming as new Chromebooks begin to support Android apps.

I’m frankly surprised that I haven’t been able to find a working intuitive secure FTP solution. There is an extension in the Chrome Web Store called sFTP that I couldn’t get to work. Considering the hundreds of low reviews it has received, I am not alone.

There are some web page solutions that look like they were coded in the late 1990s. None of the ones I found had an SSL certificate. They looked sketchy. I couldn’t trust them with my server password.

If someone knows a free solution like DbNinja, where I can install the program on my server and access it via a hidden link, please leave a comment.

Most people I am guessing would be much better off with a Chromebook. Dollar for dollar they can’t be beaten. A lot of software is browser-based now. Recently I have been debating on getting a 2nd Chromebook or a Windows 10 laptop. I haven’t decided yet. There are some coding projects that would go much smoother on a Windows laptop, but they cost more.

I do like the Acer Chromebook 14. And HP makes a slick 11.6 inch Chromebook if you want something super portable.

Next Why the Events of 2016 Did Not Surprise Me