Made in the Spirit of the Early Web

I recently released a brand new version of my radio tribute site NeilRogers.org. This is what I added to the footer of the site.

2012-2021 NeilRogers.org is a project maintained by Michael Allen Smith with the support of Neil’s heir, attorney, and fans.

The code for this site is freely available on GitHub. Use however you like. Creative Commons 4.0.

This site does not track users or display ads. No pop-up windows either. It is a hobby site made in the spirit of the early web.

I have become increasingly frustrated with the web in recent years. Almost every site you visit, you get hit with ads, newsletter pop-ups, warnings to turn off ad-blockers, and a button to accept site cookies.

No wonder people camp out on Twitter and Facebook. As problematic as those sites are, the regular web feels like you are getting pickpocketed on Times Square.

I can’t change the world, but I can make websites in the vision that I as a user would prefer to visit. No tracking. No ads. No cookie acceptance buttons. And no need to turn off your ad blockers. Privacy extensions are cool with me.

The site was coded using GatsbyJS, which is a static site builder that uses React. I deploy the site on Netlify for free which monitors my GitHub repo for changes. The user gets static HTML. No server-side code is needed. A fast WordPress site that uses server-side code will take 1-2 seconds to load. Most take double or triple that. A static site on a CDN (Content Delivery Network) often takes less than 1/2 a second.

I learned GatsbyJS from YouTube videos and online tutorials. I’m still a beginner in that tech stack, but I learned enough to accomplish the task. 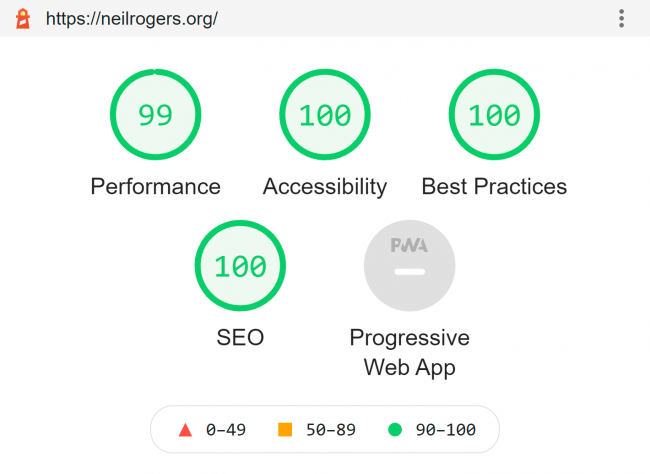 Not bad for a newbie.

The spirit of the early web was about sharing. I share something and you share something, and we both benefit. Today everything needs to be monetized. Most sites don’t make money or if they do it is tiny.

Is it worth it to annoy your readers with ads and trackers for chump change? I went down that path and made some money. I still make money on INeedCoffee, albeit 10% of what I made years ago. Passive web revenue is rarely passive, as you are constantly working to figure out the next passive web strategy that works. Because – spoiler alert – they all stop working eventually.

This summer I removed hundreds of links to Amazon on this blog. I’d much rather have an insightful comment from a reader than send them off to Amazon where I might earn a 27 cent commission. One comment I received this year appears to be life-changing, which I plan to blog about later this year. Worth far more than all the revenue this site has ever made. For now, I’m still pimping Amazon on INeedCoffee, but that site doesn’t have comments and the product connections still make sense.

Next The Box of Tapes

Previous The Chattanooga ColPac is a Great Tool For Summer Sleep