For Sale By Owner – Don’t Do It

A friend of mine recently told me she was going to sell her house herself. She asked me what I thought of that idea. Here is what I told her.

There are 2 cycles to the real estate market. A buyers market and a sellers market. 2004 was the end of the sellers market. Today the buyer is in charge. If this were 2003-2004, I’d say For Sale by Owner is a fine idea. Not anymore.

As a seller you need buyers. Buyers agents will NOT show their buyers homes that are FSBO. Buyers agents also don’t waste their time with people who are not qualified to buy a home, so they pre-screen. FSBO tend to get less money because buyers will offer even less because there is no agent. FSBO also get the “seminar crowd” that try and come in hyped up from some infomercial offering far less than market thinking you are desperate. This wastes your time.

Another thing that affects your sale price is “days on market”. Like a movie, you’ll get the most interest in the first few weeks. Then it dries up. The longer you are on the market, the lower the offer will be when it does come. Firing your agent every 90 days, resets the clock on that timeline.

When you interview an agent, grill them on the market. Tell them to tell you exactly what to change about your house for a good showing – even if it hurts your feelings. Not telling you and then coming back later for a 20K price reduction will be more painful. Tell them you expect pricing advice to be based upon data, not on a failure of their part to sell.

My advice is to find the best performing agent in your area with the best marketing. Ask the agent at what price can this house be sold for in 90 days. Demand open houses and newspaper ads weekly. Be priced better than your neighbors. Prices are falling. You need to go for the fast sale to qualified buyers. If anyone asks why you are moving, tell them you need to be closer to the airport for your job otherwise you’d never move.

In the end I learned the game. We ended up having 2 offers on the same day. The same house that was priced higher than us is still on the market and just dropped their price 25K. I expect it to drop again.

Last piece of advice – never ever hire a friend as your listing agent (buyer agent is OK). You will push your agent weekly for updates and hound them for the sale. And very likely end up firing them. If they are your friend they won’t be after it’s all over. 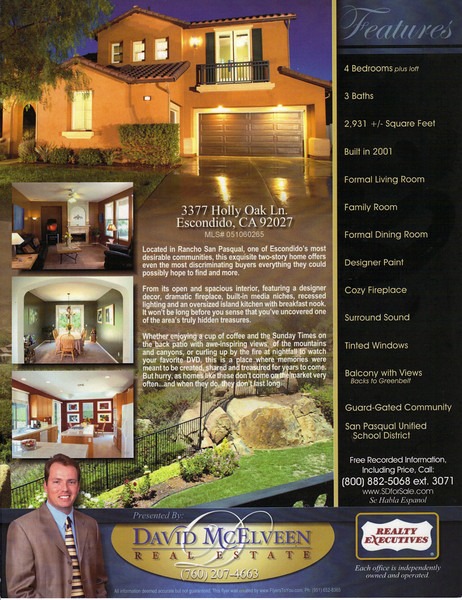 A good agent will be able to knock out marketing material that sells your home.

I despise real estate agents and place them in the same class as lawyers… if not below. I actually bought my current home without a buyers agent at all. In that case the selling agents usually will try to claim the buyers-side of the commision (the other 3%) but I specifically disallowed that in the offer I wrote up. I think the seller was a little wierded out by it but I spoke with them personally (cutting out the weasel middle-man) and got the deal done.

But you make a lot of great points about the current market situation and the lack of exposure when going FSBO. There are other options these days, though. If I were selling my home now I’d likely go with a cut-rate discount broker which are readily available now. With one of those you can typically pay a flat fee (say $300), get your property listed in the MLS, some signs, etc. And of course your house will still get shown by all the buyers agents because you’re still offering the 3% commission to those weasels. But you’re saving most of the 3% that would normally go to the selling agent.

I really believe a great listing agent earns their commission. So instead of nickeling and diming the lesser agent, I’d rather take the rock star (in this market).

Although the agent that sold my house wasn’t perfect, his marketing was amazing. The flyers for his listings were better than any agent in North County San Diego. In the end, he made a lot of money, we made a lot of money, and the other house we were competing against is still for sale albeit at a lower price.

I agree with MAS. IF you don’t know what you’re doing (and don’t care to know) then go with the best agent you can find in your area. Thoroughly screen them and ask them tough questions (and interview many — in any given area, on average, only about 15% or so are actually any good and close enough transactions to make a living at it). Also, only sign short term listing contracts (3 months) – don’t get locked into a long term listing (9 months) with someone who sounds good but ends up doing nothing.

1. Stay in control of the process. In other words, do your homework and don’t just do everything the realtor says just because he’s a realtor (namely, price).

2. Do NOT tell the agent ANYTHING you wouldn’t want him/her to share with anyone else. Ever. Even if he/she tells you they won’t share it with anyone, they will. Probably not verbally, but it just comes across usually one way or another. I’m thinking specifically about motivation/reason for selling, your timeline, and bottom line price.

Does anybody know how to choose a good agent. The person who sold us our new house also sold us the one we’re in. She’s part of the Diamond circle or something and sends us pictures of herself near in Bentley in a gown (the car is not hers but she gets to go to the dinner in it). Anyway, I looked her up and she has 5 listings.

Yesterday a real estate team of 2 came during our FSBO open house and had a good interview. It was raining hard and they had already left us info hanging on our door the day before and they had our ear (the first we allowed ourselves to listen to other than the first “diamond” broker. When I looked them each up, one had only one listing and the other had just two.

So, how do you decide? The diamond broker never has come to see our open house to show her support(?)(maybe because we told her we’d go with her).

Should we go with a broker? We started selling on May 5th, have lowered our price to what is fair for our market. We have another house. We’ll be paying two mortgages soon. Any ideas?

Read my post My Advice on Selling Your House for my ideas.

Next Summer of George