I first learned about the Paleo diet in December 2007 when I read Art De Vany’s original essay. Back then there were few resources to get you started. Not anymore. There are several books and thousands of blogs. Where does the newbie start?

This post is a summarized quick-start approach to Paleo. I’ve successfully practiced a mostly Paleo diet for over 3 years now. I’ve read most of the books, watched many of the lectures, and read probably a thousand blog posts on the topic. You don’t need to spend near that amount of time to benefit. Just follow the list below.

#1 Understand that Wheat is the Enemy

The single best idea in the entire Paleo diet is the elimination of wheat. All the other ideas combined will not have a greater impact. There are different factions in the Paleo community that disagree on certain points. They all agree on the health risks of wheat. There is even a growing concern among many vegetarians about the dangers of gluten.

I rank eliminating wheat as the single most positive change I’ve made to my health. People defend wheat because they don’t what to believe the food they love so much could be the cause of so many health issues. I ask people to do their own 30 Day test. Eliminate wheat for 30 Days, reintroduce it for 4 days and then measure how you feel.

The single best-hour podcast covering the Paleo diet was episode 39 of LatestInPaleo. Angelo Coppola and Mark Sisson cover a lot of material in a short time.

Although I have my own personal favorite books when it comes to nutrition and the Paleo diet, I think the best one to get started on for most people is The Primal Blueprint by Mark Sisson.

#4 Buy a Slow Cooker (aka The Crock Pot)

Your success in following the Paleo diet will increase greatly if you start cooking more of your own meals. Slow cookers are perfect for the Paleo diet. Throw in some meat and veggies, turn the knob and wait. What could be simpler? 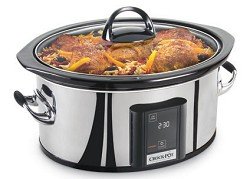 I could probably go on and on, but then it would hardly be a quick start. Follow the 4 steps above and you’ll do great.