Running Up That Hill – Sprinting Salvation For Tall People

There was a time when I really loved running. Well, I loved it during those rare times when my body wasn’t in pain, which was not as often as I would have liked. By the middle of 1995, I gave up running. It was just too hard on my 6-foot 2.5-inch body.

The first clue that I probably shouldn’t be doing distance running came in 1992. The USA Olympic trials for the Men’s Marathon came to my hometown of Columbus, Ohio. I clearly remember flipping through the program which highlighted the 125 runners that were invited. Only one runner was over 6 feet tall and he didn’t place in the top 3. If 14.5% of all men in America are over 6 feet tall, why were less than 1% of our elite distance runners that tall? Some of us gravitate towards other sports that reward height, but the rest of us just experience too much pain when we run.

For the past few years, I’ve been a regular reader of Conditioning Research, which has had numerous articles on the benefits of sprinting and high-intensity interval training. Here are a few examples.

A few months ago I got fired up to start sprinting. Right from the beginning, I was having pain issues. I adjusted my warm-up and tried to improve my stride. It helped, but whenever I tried to dial up the intensity, something would happen and I’d be sidelined.

I understood why distance running was hell on my tall physique, but why was sprinting a problem? Thankfully, the search engines were able to answer this question for me. From the article Taking Sprinting to New Heights by Edward McClelland:

Traditionally, height has been seen as a detriment to sprinting. The formula for speed is stride length times stride rate. If the longest legs always won the race, then Yao Ming would have the world record in the 100, and lions wouldn’t eat giraffes.

Big guys have physics working against them. According to the Journal of Sports Science & Medicine, “[T]he acceleration of the body is proportional to the force produced but inversely proportional to the body mass, according to Newton’s second law. This implies an inverse relationship between height and performance in disciplines such as sprint running.” In other words, it’s hard to produce enough power to overcome the drag of a big body.

The article discusses how 6-foot-5 Usain Bolt became an amazing sprinter only after he shortened his stride. But I have no interest in working on my technique or becoming a great sprinter. I just want the health benefits without feeling pain.

Running Up That Hill

The problem with running for tall people is the long stride. One way to shorten the stride is to wear minimalist shoes. That is a good start, but the best way I discovered is to just run uphill. Unlike my first two hometowns of Columbus, OH, and St. Petersburg, FL, which were flat as a pancake, Seattle has some amazing hills inside the city. One of those hills just happens to be less than 100 meters from my front door. 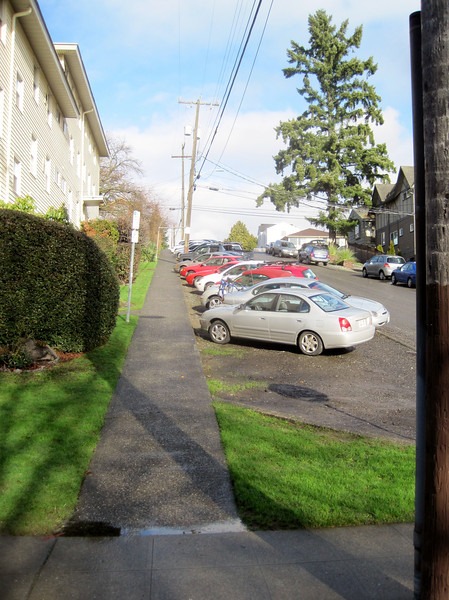 I’m not the first to figure this out. Conditioning Research also did a post on hill sprints titled The single best exercise. For the past month or so, I’ve been experimenting with just running uphill. My body loves it. My stride is shorter, the intensity is much greater than flat ground sprinting and my body doesn’t take a pounding when my foot lands. And it is time efficient.

I’m using Phil Campbell’s Peak 8 protocol as a template. Go all out for 30 seconds and then rest for 90 seconds. Repeat this 8 times. For me, this means sprinting uphill and then slowly walking back downhill to ready myself for the next sprint. I’m easing into this program and expect to be at 8 sets within two weeks.

I’m running again. Only this time I feel great.