My Experience With The Zone Diet

The worst diet isn’t the one that doesn’t work. The worst diet is the one that works extremely well in the short term but fails in the long term. The diet that never works gets discarded and the dieter can move onto a new approach. The one that works only in the short-term followed by a return in weight gain is more confusing to the dieter. They almost always blame themselves for not sticking to the diet and if they only stuck with it they would be successful. They rarely conclude that the failure of the diet in the long term wasn’t their fault. Years go by and the loyalty remains and so does the weight. The diet that fooled me the longest was The Zone Diet.

The Zone Diet hit big in the mid to late 1990s. The premise of the diet was our macro-nutrient ratios should be “40-30-30”. That is 40% carbohydrate, 30% protein, and 30% fat. To a population that had demonized the role of fat, especially healthy fats, this was a welcome message. And the carbohydrate restrictions weren’t as tough as the Atkins Diet, which was popular in the 1970s. In other words, it was interesting enough of an idea to capture the attention of the public. This included me. 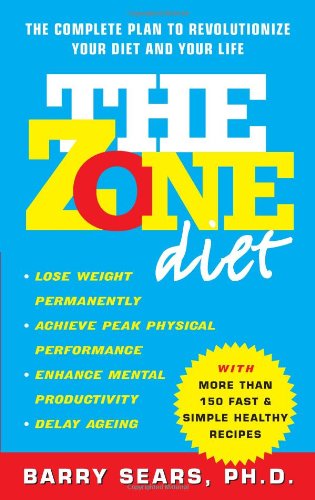 Prior to The Zone Diet, I accepted the low-fat argument peddled by the mainstream press as being the healthy choice. This meant I bought low-fat food options and cooked low-fat meals. Then when I went out to eat, my body was so starved for fat that I’d gorge myself. I could polish off an entire pizza in a sitting. My body wanted the fat from the cheese in the pizza desperately. I was never lean during this period.

The Zone Diet worked great for me at first. I never weighed my food, but I did follow the “eyeball method” to gauge the 40-30-30 as best as I could. The skills I learned reading labels as a vegetarian came in handy. I started leaning out on The Zone Diet. At that time it was the leanest I had gotten as an adult. Note that I am leaner today. The problem was my progress was unsustainable.

The Zone Diet says to eat small little meals every few waking hours. This is still conventional wisdom. When you first start that habit it isn’t easy, but if you stick with it, it gets very easy. Too easy. Soon you’ll find yourself hungry all the time. I responded to that hunger by eating more. The weight I lost all came back. Back then I blamed myself. If I could only get my act together, The Zone Diet would work for me again.

The Zone Diet Was Flawed, I Wasn’t

The idea that there is a perfect macro-nutrient ratio is nonsense. Traditional cultures closer to the Equator thrive on higher carbohydrates and those closer to poles thrive on higher fat. What they don’t do is count calories or ratios. They eat nutrient-dense diets of varying sizes at varying times. They alter their diet seasonally too. And certainly don’t eat Zone compliant “nutritional” bars.

In my opinion, the biggest problem with The Zone Diet is the rule that has dieters eating multiple small meals throughout the day. Our body produces the hormone ghrelin to stimulate hunger. When we eat at predictable times that signal gets stronger and stronger. And in the end, hunger always wins. Soon you’ll find yourself eating more in response to stronger hunger signals. The Zone Diet isn’t the only diet that is guilty of this “eat little meals” nonsense. Read the Leangains article Ghrelin and entrainment for an excellent summary on this topic.

Other people have picked apart different aspects of The Zone Diet. For me, the primary problem was the frequent meals resulted in frequent periods of hunger. And often I’d respond to that hunger by making poor food choices that were convenient. I was uncomfortable with the feeling of hunger. Ghrelin was doing its job, which was keeping me alive and telling me to eat because food is plentiful and available now.

I credit Art De Vany for showing me the light. His original Paleo essay exposed me to the ideas of Intermittent Fasting and not eating all the time. In his DVD lecture, he warned against counting calories, which he referred to as “command and control” diets, because they never work in the long term. I embraced Intermittent Fasting and added randomness into my diet. Today I am 25 pounds lighter than I was in January 2008. I can go many hours without eating. When I eat, I can have a small meal or feast. My fat loss was effortless and it has been effortless to maintain. That should be the goal of any diet.