So Much Paleo Drama

In the past few years, I’ve seen many nutritional bloggers attack each other. Not just their ideas, but personal attacks. As someone with strong opinions on certain topics, there have been times I was tempted to “throw down“, but I’ve always resisted. The times when I found myself most likely to go into attack mode is usually when a learning opportunity was just around the corner. It is when the ideas we hold closely are challenged is when we are most likely to attack.

The great thing about being me is that I can change my mind anytime I want. I am comfortable with admitting I am wrong or don’t know. I embrace ideas I find interesting and discard the ones that don’t appeal to me. What some study says is less important to me than what my own experiment reveals. I see nutrition through the eyes of traditional cooking first and science second. That has served me well as the PubMed Warriors defend studies that affirm their bias and attack the ones that don’t.

Attacking is Good For Page Views

I’ve had a web presence of some kind since 1996. I’ve learned there are two basic ways to build an audience. One is to write compelling content and hope an audience likes what you are offering. The second way is to attack someone more popular than you and hope they respond. I could easily poke a stick at a few top nutritional bloggers and get at least one to respond. But I couldn’t care less about pageviews. The motivation for this blog is about learning and sharing. And as I mentioned above, at the point I most want to attack is usually when I am about to learn something.

I have tremendous respect for health bloggers that when they get attacked, ignore the personal aspect of the attack and instead use the increased attention to bring the discussion back to health. They are focused on doing what they believe is best for the health of their readers and not defending their egos.

I am currently reading the book The Information Diet, which makes an excellent point. People often aren’t seeking information, they are seeking affirmation. They read the blogs and share the links to what they already believe. It comforts them. We see this in politics, but it exists everywhere especially in nutrition. Paleo worshipers are quick to tweet a story that conforms to their already held belief and the Paleo attackers are quick to do the same with their information. Confirmation bias closes off learning opportunities. 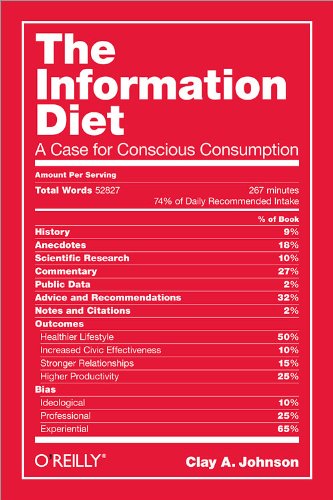 The Information Diet: A Case for Conscious Consumption by Clay A. Johnson

The title of this post is in reference to the blog Paleo Drama, which I have mixed opinions about. Although it does expose some Paleo quackery, it also gives attention to the very people they detest on topics that have nothing to do with health. In the digital age, it is best to shun the behavior you abhor, not to shame it. Shame rarely works anymore, it just delivers more attention to what you despise.

UPDATE (Feb 6): Paleo Drama responded. Below are my comments.

Some clarifications. I am not anti-Pubmed. I am admitting that I’m unqualified to read scientific literature on nutrition with a high level of comprehension. I have tremendous respect for those that can AND are able to communicate that information to the average person. Hammering people over the head with links to PubMed without context is a form of intellectual bullying.

When I say I use a Paleo/WAPF basis for my nutritional decisions, I am not saying it is perfect or optimal. I am saying I don’t know, so I choose traditional methods as the foundation of my diet. It may be the wrong decision, but it won’t ever be too wrong. I will let others dig through PubMed, I’ll be in the kitchen.

We clearly have different views of human nature if he thinks that health bloggers don’t speak up on other issues for the health of their readers for their sake and not because they need to keep up the party line for the $$$. And I definitely feel tolerating hateful behavior is unhealthy.

I like how Paleo Drama goes after the $$$ quackery because it is there the connection to health is clear. As for tolerating hateful behavior, I don’t tolerate it. I ignore it and move on. I don’t draw attention to it, which is often exactly what the hateful person is hoping you will do.

Next Making Ghee in a Slow Cooker

Previous Getting the Genetic Test