Two years ago I began tracking headache data. Fresh off of other health victories such as getting lean, curing my rosacea and ending back pain, I was confident that with enough data and experimentation I could eliminate or greatly reduce my night headaches.

I never thought this experiment would go on for two years.

The good news is I’ve eliminated so many suspects. The bad news is I haven’t won this battle and it appears that the one variable that I’ve found is most correlated with the headaches is my good friend coffee.

When I dropped my caffeine levels super low in October, my headache levels dropped to an all-time low. Since then I’ve been gradually increasing my coffee levels with a plan to cut back again once the sun arrived to Seattle. The reintroduction of higher coffee levels would also provide more points of data. I’m not a statistical guru, but this pattern seems clear. 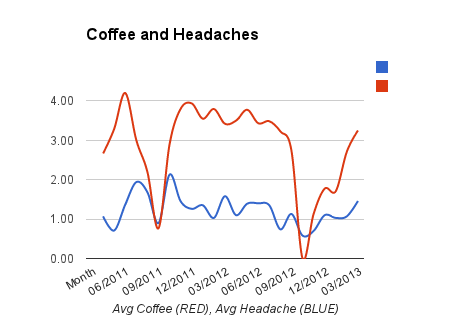 This chart shows 2 years worth of data. On three cases when my average coffee intake spiked, my average headache intensity increased. And the two cases where I drastically cut back on coffee, average headaches intensity noticeably dropped. Now before someone says correlation does not imply causation, this is all I have to work with. Weather patterns, food restriction or taking a battery of nutritional supplements showed zero correlation.

Why did I increase my coffee levels so much recently? The primary reason is that I pulled my espresso machine out of storage and placed it back on the kitchen counter. Espresso has less caffeine than brewed coffee, but is far more addicting. When you nail a perfect espresso shot, it provides a flavor stimulus that brewed coffee can’t even come close to hitting. As my flavor stimulus increased, so did my consumption level. When I did the detox, I intentionally used a flavor deconditioning strategy which I described in the article A Month Without Coffee.

This sucks, but I’m now convinced I need to sell my espresso machine. I’ll save my espresso drinking for the cafes. Let us hope that is enough. If not, I may have to move away from Seattle. My guess is having an espresso addiction in Seattle is like having a gambling addiction in Vegas.

Next My Evolving Opinion of Sugar