I am back from an 8 day trip to my home state of Ohio. My last visit was in December 2011. I covered that experience in the post Paleo in Ohio – Adventures in Inflammation. In that blog entry, I discussed how I tried my best to dodge the 4 big toxins, which were gluten, veggie oils, sugar and legumes. Since that trip I’ve moved sugar off the toxin list and placed into neutral status.

By trying to eat Seattle clean during that trip proved impossible and I got some gluten exposure, which made me ill. I was also getting back pains due to stress caused by my lack of dietary control.

I learned a lot that trip. Being neurotic about food can be worse for our health than just embracing what is outside our control as best as we can. It was then that I refocused my health journey. It would no longer be about being more healthy or seeking optimal health. The focus shifted to resiliency. I covered that in the post Healthy vs Resilient.

For this trip I decided my only goal would be to avoid gluten. It really would make me miserable, so I can’t bend on that. Everything else was wide open. Avoiding veggie oils would be impossible and would make me a poor guest if I tried.

So during my trip, I had no pastured meat, nothing heirloom and only a single organic apple. Everything was cooked in veggie oil. I had some legumes. I drank a few colas that had High Fructose Corn Syrup. But I didn’t have any gluten exposure. The result was I felt great and got great sleep. I gained a few pounds. Oh well.

I ate at Taco Bell, Wendy’s and Boston Market. I survived. 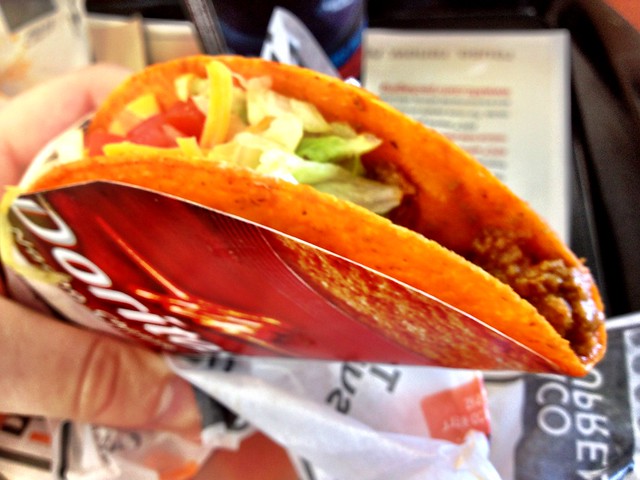 I had both Doritos style tacos while in Columbus. Photo by Karl Baron.

Now I am back home and eating more healthy again. Last night I had a Beef Heart Stew using my my homemade beef stock. Taco Bell will have to wait until my next visit to Ohio.