For over a decade I’ve had a weird relationship with yoga. I always suspected it had value, but I never made it a priority. It was something I’d get around to doing later. In the meantime, I’d focus on the real exercise of lifting weights. But every so often, I’d get motivated to start doing yoga again. I’d start with a goal of doing it once or twice a week. Even though I had the DVDs, I never stuck to the goal. The idea of spending 30-45 minutes doing yoga was rarely appealing to me.

Yoga and other mobility routines were sometimes frustrating to me. I had trouble getting into the positions or trouble following the instructions. And then there was the breathing. Whenever I was instructed to inhale was usually the point I was bursting to exhale. Instead of being relaxing, yoga was often stressful. My controlling and goal driven nature that I had used successfully in other endeavors was failing with yoga. But it was never a priority, so it didn’t bother me. Over a decade ago, I did attend a few yoga classes, but I could never keep up. I hated them. 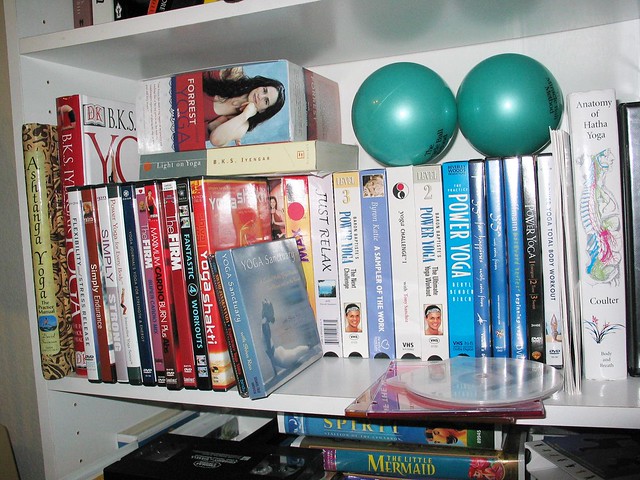 Yoga Shelf photo by txkimmers. YouTube replaces all this.

Then I discovered the book 3 Minutes to a Pain-Free Life, which I have raved about a few times on this blog. A friend of mine mentioned that movements I was doing were classic yoga poses. I was deriving a tremendous amount of benefit from movements that required zero skill, were time efficient and didn’t rely on me timing my breathing. A month ago I decided to revisit yoga. I wanted to get the benefits from the movement exercises that I had experienced with some of the holds.

Knowing how I had failed at every other attempt to incorporate yoga into my exercise routine, I decided to break the goal down into several stages.

This plan is working for me. I removed the stress of a long time commitment and being perfect on the movement. And I’m not pushing myself into positions beyond my skill level. Thanks to YouTube, I don’t need to pay for yoga classes or even DVDs. I’ve been at it for a month and I’m up to stage #3. Slow and steady. I already feel a lot better. My posture has improved and my movement is more fluid and varied.

* In this post I used the term yoga to describe all slow moving mobility exercise routines. This includes Foundation Training. Also, I’m using the broader definition of exercise, not the one used in the High Intensity Training community.