Facebook does not show every post to those individuals who LIKE the page. It selectively hides based on what it thinks the user wants to see. Then on my end, I get the opportunity to pay money to Facebook to get my post on the wall of everyone that already clicked LIKE. I don’t respond well to digital extortion. Below is a screenshot of the Boost Post option from my INeedCoffee Facebook page. 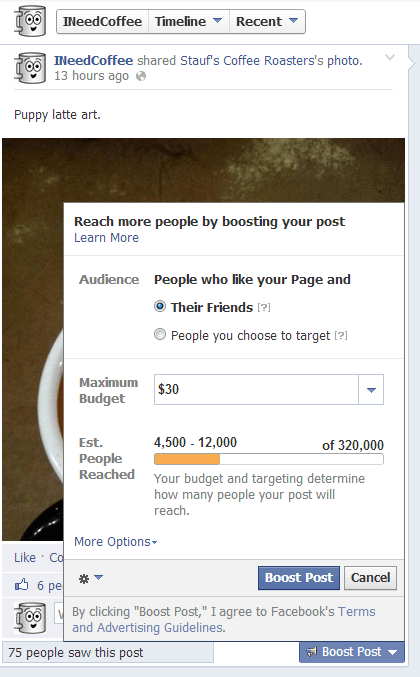 This post went up yesterday. The INeedCoffee Facebook page has 1,443 LIKES and yet Facebook has decided that only 75 should see the post. In the screenshot above you can see that for $30 I can get this post to 4,500-12,000 people. I have no interest in that offer. I’d prefer to reach 1,443 people for $0, but that isn’t an option. Some will argue that Facebook needs to make money and that I’m using their service for free and this is a fair compromise. I disagree. Not only am I providing content on my Facebook page for which they can run highly targeted ads beside without compensating me, but I’m also directing my readers to the Facebook server. Plus I am not asking to go outside my network for views.

What I noticed about the INeedCoffee Facebook page was as the number of LIKES increased, the engagement ratio decreased. I wanted to know more about Boost Post, so several months ago I paid $5 to promote a new piece of content on INeedCoffee. I wanted to see how many new LIKES I got and if that engagement increased traffic on the posts that followed in the next two weeks. It failed. The site got very few new LIKES and the engagement level dropped immediately back to pre-extortion (um I mean Boost Post) levels.

CriticalMAS has far fewer LIKES, but do I really want to go through this process again?

This blog has almost 9,000 comments. I consider them as valuable as the almost 2,000 posts. Those comments can be read by anyone on the Internet. I am a big proponent of openness and transparency.  I even acquired a search plugin that searches comments, which is something 99% of WordPress blogs do not have. Your comments are very important to me. I want to be a good steward of those words. I can’t do that on Facebook. Comments get lost as time passes. My non-Facebook readers can’t see the Facebook comments, whereas the Facebook readers can see the blog comments.

The quality of comments is getting greater and greater on Facebook. Every time I see an awesome comment, my first thought is I wish that were on the blog where everyone can see it. If I let the Facebook page continue to grow, this problem is just going to get worse.

Depending on how you reply to a comment on Facebook, you may or may not see the entire thread. It has the appearance that comments are being deleted. The only way to see the entire thread of comments is to click on the date beside the post. This is not an intuitive design. Here on the blog, every comment is visible on every page draw. Nothing is ever hidden.

Posts by Email – This is handled by Google’s Feedburner. It is easy to unsubscribe and your email address is safe. (2021: Feedburner no longer offers posts by email)

RSS – I love RSS. If you aren’t sure what RSS is, go to Feedly and set up an account. It should all make sense then. RSS connects content producers directly to readers without having to go through sites like Google and Facebook. Another great thing about Feedly is it can display content in a mobile-friendly format, even if the subscribed site can’t. 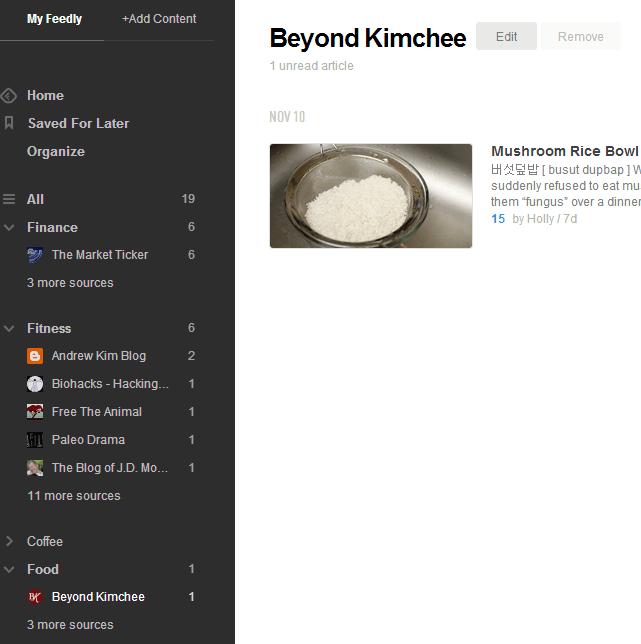 Screenshot of my Feedly RSS Reader. The left column shows the new articles I have available to read from sites I have subscribed to. I selected the post from Beyond Kimchee and a snippet from the newest recipe appeared in the right column. Sometimes a snippet appears. Sometimes the full article. For CriticalMAS, at this time I show the full article. Sites that have had copyright theft often use snippets.

@CriticalMAS – A link to each new post to automatically sent to Twitter. Because Twitter responses are limited to 140 characters, those with valuable comments will leave them on the blog.

Google+   G+ to my knowledge doesn’t hide posts like Facebook does, but unfortunately, they also collect comments, which I dislike. The good news is my G+ readers are still leaving comments on my blog and not G+.

I’m tired of digital sharecropping for Facebook. I’ll probably lose a few readers, but it is better to take a small hit now and not a larger one in a few years. So I will be pulling the plug on the CriticalMAS Facebook page in a few days. The 18-month experiment has ended. The INeedCoffee Facebook page will remain, as that audience despite being much larger, almost never leaves comments, let alone interesting ones.

Update November 2017: I quickly got bored with Pinterest and I often forget to share posts on G+, which seems to be on life support. Too bad Google fumbled that product so badly.

Also, there are now more reasons to abandon or devote as little time as possible to Facebook Pages. I still have a Facebook Page for INeedCoffee but have found it to be a waste for driving traffic. Search still rules.

Previous After the Election