My 3 Issues with Becoming a Supple Leopard

Based on all the reviews and comments I’ve seen on the web, I think I might be the only person who didn’t love the book Becoming a Supple Leopard. This post will be a brief review covering the three reasons I didn’t care for the book.

Throughout reading the book, I couldn’t tell if it was written for me – the person doing the exercises – or for trainers. This book is about safe movement. For many, if not most exercises, the person with compromised movement patterns is unable to see what they are doing wrong. They need an observer to make real-time corrective suggestions. As someone who works out alone, I don’t have someone to fill that role. This makes me think the book was really written for trainers because even if I had someone to watch me, that ability to watch movement and make suggestions is something that takes practice and training.

One idea that Stephan from BioHacks suggested was to video record your movements at the gym and then use that footage to make corrections. This is a great idea provided detecting movement errors is something a fitness hobbyist such as myself could do. This is where the expertise of the movement specialist would be helpful. They know what to look for and where. I might not even set up the camera at the right angle or I might need two different cameras to capture the movement from different sides. Even with cameras, feedback is delayed. Being able to make corrections real time would be of far greater value.

Recently I went to see Nikki at Indigo Kinetics about my tight neck and shoulder. Through close observation, she was able to see that my neck was fine, but I was over-recruiting rhomboids, upper trapezius and pec minor and under-recruiting my rear deltoid, serratus anterior, and low/mid trapezius. The result was some unnecessary shoulder elevation and shoulder blade retraction in my movements. This was causing my neck to tighten up. I would never have caught that from a book.

I came to the conclusion that although there were solid tips sprinkled throughout the book, I think this book was written more for the trainer than the trainee.

This is a technical complaint. Writing a book about movement is like singing a song about photography. It is hard to do. I understand that experts in every field write books on their field of expertise. However, I don’t think the material presented in this book is best suited for print. The book has many photos that show at most 2 points of the movement. Reading about the movement is fine, but this is 2013. This book would be so much more valuable as an application with embedded videos. Instead of carrying a 400-page textbook to the gym, one could bring their tablet. Watch 5-second clips of every movement as many times as necessary. Trainers could use it as an educational device.

The videos I would like to see wouldn’t be the longer educational clips he has on his YouTube channel, but super short crisp videos filmed with a tripod. More like what Bill DeSimone did for his book Congruent Exercise. He describes an exercise and then links directly to the online video clip of that exercise.

Dr. Starrett owns a CrossFit gym and has a huge audience with that community. I don’t want to pick a fight with the CrossFit people today, but I will say that I am not a fan of ballistic compound exercises done under load. I think they are unnecessary for strength and have a much too high risk of injury. I only bring this point up because the subtitle says “The Ultimate Guide to Resolving Pain, Preventing Injury, and Optimizing Athletic Performance”.  I would think that any ultimate guide to preventing injury would first seek out the safest exercises to achieve strength, not work on techniques to make risky moves safer. However, if your sport is CrossFit and you need to excel at those exercises, this book should be required reading. 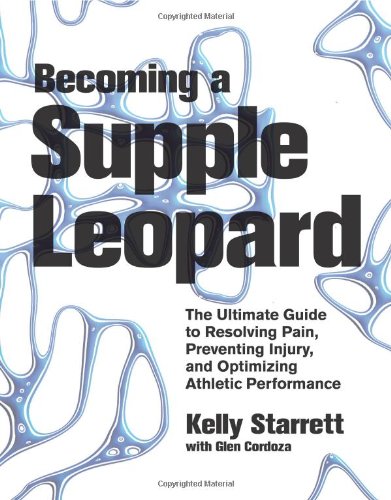 Although I don’t think this book was for me, I think it would be an excellent addition to a fitness library if you are a personal trainer or engage in CrossFit or Olympic lifting. And if Kelly Starrett is reading this post, my advice would be to hire an app developer, get a tripod and start shooting super short professional clips of every movement in the book. I really think people need to see movement. Photos and text aren’t enough.

Next After the Election